I picked up Something Personal hoping to find something more than a clone of Horace Silver, Thelonious Monk or Bud Powell. Mission accomplished. 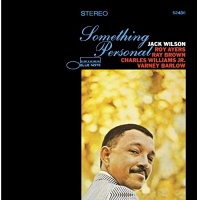 Maybe I'm imagining it, but pianist Jack Wilson owes a great big thank-you to John Coltrane on Something Personal. At least that's how I hear it on the opening track, "Most Unsoulful Woman," one of two highlights on this 1966 album.

Coltrane, the legendary saxman, released his masterpiece A Love Supreme in 1965. It is as introspective and spiritual as any music ever recorded. That's the part you know.

Here's the part you don't: A year later, Wilson recorded Something Personal. The title sorta hints at an album of introspection and, well, personal music. It's not really that—not all of it, anyway. But the opener sounds to me like a very honest, sincere attempt at the kind of spirituality that Coltrane mined for his classic. Or is it?

The title says no. The name "Most Unsoulful Woman" sounds like it could be something romantic, maybe even rueful. Maybe a she-done-him wrong song. The music is anything but. It's modal, so maybe it owes something to Miles Davis' Kind of Blue. But "Most Unsoulful Woman" seems more than that. For starters, it seems very Eastern—as in Asian, not New York. The piano seems slightly out of tune, almost like a toy piano, with Wilson playing the strings directly in some sections, rather than the keys. The song's opening 26 seconds is tuneless, just a swirling of notes and feeling. A theme follows, played twice, with the piano and bass doubling up. Then more swirling—tuneless piano notes that rain a curtain of mysticism. It all feels vaguely Love Supreme-ish. The bass solo adds to the feel of misterioso. Roy Ayers adds more swimming and swirling on his vibes solo. And then the theme returns and the songs ends, 7 minutes after it begins.

Am I hearing more than Wilson intended? Is this just a pretty piece for a lady friend? I swear the resemblance to the previous year's Coltrane is more than passing. And it is very impressive. After several consecutive listens, it left me in a seriously spacey mood.

"Harbor Freeway" is the other standout track. Again it begins with soft piano swirls—very tuneless and moody. It settles into an almost-but-not-quite-standard ballad. It is tuneful and less spiritual, but also far, far from the typical Blue Note hard bop or soul-jazz of the era. Combined, the two pieces—"Most Unsoulful Woman" and "Harbor Freeway"—feel like part of an ethereal, silky, impressionistic whole. If only the whole album were that way.

The rest of Something Personal is very, very good, but on a different level altogether. At times, the piano-vibes combo is reminiscent of the Modern Jazz Quartet. "The Sphinx" is very hard bop. "Shosh" is straight blues and swing. "Serenata" starts like 1930s ballad and segues into a boppish vibe. And "C.F.D."—whatever that stands for—is a positively scorching romp that allow Wilson and Ayers to show off their chops and speed. The closing number is Coltrane's own "Mr. Day."

Jack Wilson is a pianist I had never heard of before. I picked up Something Personal hoping to find something more than a clone of Horace Silver, Thelonious Monk or Bud Powell. Mission accomplished. Wilson is an unexpected original, and I plan to explore more of his back catalog. Bravo!

Availability: Not hard to find, but not cheap either