By JIM SANTELLA
September 24, 2005
Sign in to view read count 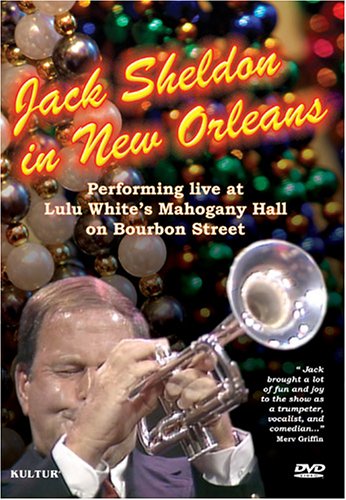 At a live 1984 performance in Lulu White's Mahogany Hall on Bourbon Street, Jack Sheldon and his all-star ensemble perform a program of straight-ahead jazz pieces that finds them sizzling as if there's no tomorrow. Sheldon's voice was then quite clear and his trumpet playing was as great as it is today. A real swinger who takes pleasure in doing it right, the trumpeter turns out one of his typically stellar performances. His sidemen solo frequently within this first-class package that finds them working together cohesively in fine form.

As the camera focuses on the quintet with close-ups and overhead shots, you can enjoy the convivial atmosphere. The room itself is large enough to accommodate a swinging band such as Sheldon's. It's colorful, and the audience is having a great time. Surprisingly, there are no hecklers. After all, Sheldon's bawdy humor usually draws out some of the most unusual characters. Not this time. It's all good music. This time, the genteel crowd seems satisfied to sit back, listen intently, and soak up the fun.

Sheldon sings "Historia de un Amor in Spanish. The ballad shows off his heartfelt vocal feelings as well as his lyrical trumpet persuasion, as the ensemble walks slowly through a traditional Spanish arrangement. Dave Frishberg follows with his own vocal interpretation of "I Was Ready, which features the pianist alone at the keyboard, singing one his humorous songs, loaded with puns.

Rosetta drives consistently at a slow tempo, allowing Sheldon, Frishberg, John Pisano and Dave Stone each an opportunity to express how they're affected by this classic song. "Corcovado features Pisano with a lovely interpretation of this classic Jobim ballad. The session closes with "The Joint is Jumpin,' which pushes everyone into high gear, and closes with the fireworks of Frank Capp's fours. The joint certainly was jumpin,' as this highly recommended video performance bears witness.


Track listing: Yo' Mama; Don't Get Around Much Anymore; Historia de un Amor; I Was Ready; The One I Love Belongs to Somebody Else; Rosetta; Corcovado; The Joint is Jumpin.'