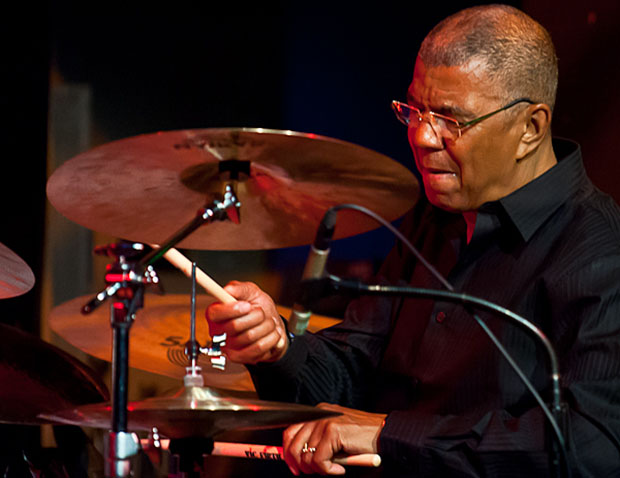 It was a sold out house of 365 people on the opening night for drummer Jack DeJohnette's 70th birthday celebration concert at Yoshi's Jazz Club in San Francisco, California. DeJohnette brought two friends—pianist Chick Corea and bassist Stanley Clarke—to add to the festivities. Shortly before they made their appearance, Clarke's bass was brought out onstage. People hushed and nearby someone said, "It's starting." A few minutes later, stepping through the curtains that formed the backdrop, DeJohnette, Clarke, and Corea mounted the stage. The whole of Yoshi's burst into an explosive, prolonged applause that went on and on, in tribute to three of the world's most decorated jazz musicians. The applause diminished slightly, when DeJohnette took up the microphone, but even then he had to wait so that he could be heard. Finally, he said, "It's good to be back in San Francisco. I'm feeling good on this 70th birthday of mine and we're ready to put on a show for you." Again a huge round of applause filled Yoshi's.

With that, Corea opened with bassist Steve Swallow's "Eiderdown—a brief solo, before DeJohnette, mallets in hand, played over his cymbals, striking his floor toms and all the while gently nudging Corea on the grand piano and bringing Clarke's bass into the smooth, well-balanced piece. DeJohnette used his drums as though he played a variety of instruments all at the same time. The piece built in strength and, in the end, the power of the tune unleashed itself at the hands of these masters of the art.

That first piece set the stage for the incredibly fine set that followed. In most jazz concerts, the sequence of the pieces played is an important part of the overall effect with which the audience walks away at the end of the night. This means that each tune selected must have an affinity for the previous one in the lineup. Here, the trio produced a masterpiece.

By the fourth tune, Clarke's "Light as a Feather," the sequence followed the groove. Clarke opened with a solo that seemed to pull everything possible from his amplified bass to produce a wonderful melody. When Corea and DeJohnette joined, the pianist's fingers played over a broad spectrum of the keyboard, striking it with sharp, clear hits that rang clearly and cleanly throughout. Simultaneously, DeJohnette seemed to play all of his drums and cymbals all at the same time and with the precision of a master. Clarke inserted an exciting solo, playing at times with his full hand on the strings.

During applause at the end of the piece, Corea leaned over the piano and gave Clarke a thumbs up. Clarke smiled and returned the gesture. For the last piece of the night, pianist McCoy Tyner's "Passion Dance" brought the set to a passionate crescendo. The trio drove the piece forward, fell back somewhat and then drove it even higher toward its powerful, no-holds-barred conclusion.

Before the piece ended, the audience stood giving them an intense and continuous applause that, much like in the beginning, wouldn't let up. The encore to this incredible set was saxophonist Joe Henderson's "Recorda 'Me," with DeJohnette laying the piece out with both power and finesse, meticulously weaving rim shots as Clarke and Corea came through and over the top.

These three giants not only had full control of each piece of music—developing them internally so that it was like the pieces of a puzzle being laid down so that each number eventually contributed to the whole. In the beginning, the concert opened with a relatively mellow piece but, with each passing song, the internal power of the tunes increased. As the concert concluded, it was easy to look back and to see that all of the compositions meshed, displaying a richly textured, highly sophisticated, and intellectually satisfying concert from a trio of legendary musicians.