By NENAD GEORGIEVSKI
October 23, 2011
Sign in to view read count 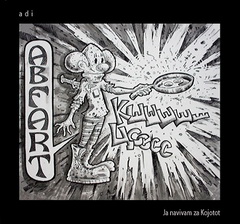 Although a key member of the underground band Jabolko Za Daskalot (An Apple for the School Teacher) guitarist Adi Imeri—а prominent figure on the inconsistent but diverse Macedonian underground music scene—has also been involved in numerous side projects, most notably String Forces and the experimental/ambient collective Zdeev. On Ja Navivam za Kojotot (I Cheer for the Coyote, referring to the famed Warner Brothers Roadrunner character), his first solo record, Imeri pushes the boundaries of solo electric guitar.

This recording may surprise some of Imeri's admirers, even though he has been exploring this kind of radical free improvisation for quite some time. Although a classically trained guitarist, Imeri has become a leading advocate of improvised sound art; given citing experimental guitarists like Robert Fripp, David Torn and Christian Fennesz as influences, it is hard to think that he would approach this solo outing as comfort food.

Imeri takes the DIY approach: he is the performer, engineer and mixer, and all but one track was recorded with a single guitar and loops, without overdubs. This is guitar music in its most direct but unobtrusive approach. In his hands, the guitar becomes more than an instrument, by pursuing a sound-shaping approach that is grittier, darker and looser. The sonic sculptures consist of frantic and intricately textured works, executed with assurance and focus. Imeri sees and approaches his work as an act of discovery and, as such, it explores collage and drone as well as ambience. The results are slightly different than other projects of the genre, though, in their emphasis on mood and nuance rather than on structure.

Nevertheless, it is clear that what drives him and makes him different are his curiosity, the thrill of playing guitar, technical prowess and a fervent interest in all music, be it classical, improv or jazz. Ja Navivam za Kojotot exposes a side of a musician better known for disguising his emotions and ideas in noise.

All Aboard; Who Sent You?; Swimming With a Hole in My Head; Please, Be Careful; The Altair of All Maybees.