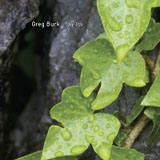 It takes its time, this music. On first listen it comes on like the work merely of an accomplished piano trio that ticks all those boxes labeled with qualities such as technical accomplishment, urbanity, harmonic sophistication and the like. Further listening, however, reveals something a whole lot more worthwhile.

The spirit of Herbie Nichols stalks the ugly beauty of "Hupid Stumid and that's a cause for celebration, resonating as it does in a historical sense with Burk's belief in music as a medium for growth and discovery. Thus, whilst Burk's composition in this instance hints at Nichols, his piano playing hints at McCoy Tyner's chromaticism.

He's well served in the realization of his music by bassist Jonathan Robinson and drummer Luther Gray. The concentric lines of "Operetta are perhaps the best realization of this point, as the group utilizes its undoubted technical accomplishments in service of some greater, less easily defined whole. In that respect, at least, they might just be a trio whose attitude towards being able to play in extraordinary time signatures is merely a tool for the accomplishment of greater ends.

Any diffidence this implies is most evident on "Look To The Neutrino. As an opener, this one is both a statement of intent and the work of a trio that's deeply connected. Over a clanking, cyclical piano part Burk teases out synthesizer lines which lend the music the air of fusion. Aesthetic concerns outside of that, of mere technical flash, keep the music grounded in some other place, however, and the rolling groove of the piece suggests musicians concerned as much with affairs of the heart as of the head.

The small sounds and measured approach of "Ducks And Gulls are imbued with something else entirely. The lyricism of the piece is underscored by the trio's willingness to let the music breathe. For all of its uncertain air, a point underscored by the unresolved nature of Burk's lines, there is a unity of purpose which marks it out as something special. The mood overall is a rarefied one, and Robinson's bass, imbued with the needs of the music in the moment, is an object lesson in sensitivity,

So, there are no Nirvana or Radiohead covers here to make transient headlines. Instead, what we have is a trio that just happens to be made up of piano, bass and drums, realizing deeper musical ambitions. That depth is evident throughout a program that is essentially one of 482 Music's more mainstream releases, even though that term is rendered irrelevant by its quality.

Look to the Neutrino; Blink to Be; Dumbo