By EYAL HAREUVENI
November 1, 2011
Sign in to view read count 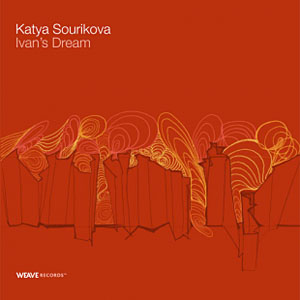 The third release of Berlin-based pianist and composer Katya Sourikova looks and sounds like something fitting the ECM catalog—the beautiful cover, the pristine and rich sound of the recording, and, obviously, the genre-binding beautiful, lyrical and nuanced music that moves freely and organically along the spectrum of jazz, both American and European, as well as folk music and classical music, all without subscribing fully to any genre but embracing it all.

Sourikova has collected ten self-penned compositions, all written when she began to explore the harmonic and melodic possibilities of the new language of jazz, as well as its boundless energy, after finishing her classical music studies. All the compositions have been rearranged, but all still capture their innocent freshness, clarity and their warm, melodic, cinematic narratives.

The opening soft ballad, "In the Dark," references Bill Evans and Keith Jarrett's lyrical playing, but Sourikova enriches the simple, fluid structure by adding a Bach-ian counterpoint. "Off the Beam" features the sensitive interplay of the core quartet, with short, well-articulated solo parts by bassist Simon Nauer and tenor saxophonist Oliver Fox, all thoughtful and opinionated.

The title piece is a successful exercise in integrating the improvised, energetic syncopated lines, influenced by such innovative saxophonist as Charlie Parker with the analytic exploration of folksy, pulsating rhythms by composer like Béla Bartók. Sourikova present her disdain with the politics of war on two compositions. The lyrical "Hagakure" draws its inspiration from the book The Way of the Samurai, and attempts to touch this sore issue from the perspective of the consternation of the women of the samurais preparing for another war. The more whimsical "Switchblade," originally titled "Puppet Tango," is Sourikova's sinister response to the futile war in Iraq. This impressive album is concluded with the optimistic, rhythmic "For Love Once More," another beautiful and arresting melody, that convinced Dave Douglas after hearing it, that he need to drink vodka.