By NENAD GEORGIEVSKI
December 27, 2012
Sign in to view read count 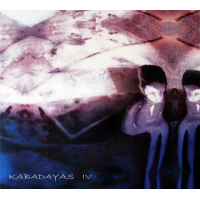 IV—the exciting debut from an international quartet founded by its ferocious rhythm section of bassist Djole Maksimovski and drummer Dino Milosavljević—represents a fairly strong start. The group thrives on the cohesive whole, playing as one but in a state of continual conversation. As the name itself suggests—"kabadaya" is local Macedonian archaic jargon for swagger(s)—the musicians do show their skills on their respective instruments.

Guitarist Zoran Kostadinovski and clarinetest Goran Bojčevski may not be as well-known to the general public as Maksimovski and Milosavljević, who have earned themselves quite a reputation rocking dance floors as the rhythm section for the likes of guitarist Vlatko Stefanovski, as well as jazz bands Sethstat and the Beneventan trio. Nevertheless, their mutual experience and empathetic instincts generate an interesting cohesion on this record. While jazz is obviously a starting point, the band members have each infused themselves a myriad of various influences, be it folk, classical or rock music. But the common denominator is still jazz; filled with intricate melodies and infectious rhythms that don't sacrifice group conversation and adventure.

The dynamic opener, "Leona," uses tricky time signatures, and while Milosavljević rocks the boat, he still keeps it afloat, supporting some interesting interplay between guitar and clarinet. The uneven 26/8 rhythm pattern of Bojcevski's "26 zachini za kraj....," with its dominating clarinet theme, indicates strong folk influences, with Bojčevski wringing as much feeling as possible from his instrument.

What is special about this quartet is that there is always tenderness to spare, even at its most enthralling moments. The characteristically melodic bass lines of the slow-paced "Planet Vedra" are decorated by the sound of hand drums and background, klezmer-like clarinet melodies. Even the elegiac, cinematic closer, "Fala mi Lidija," is gentle and deeply moving, originally co-written with keyboardist Simon Kiselicki for The Beneventan Trio. Milosavljević's playing is tremendously soft here, as he uses brushes for its propulsive beats while the mournful clarinet and background guitar evoke a plaintive character. "Nessie" is straight-ahead funk, with the band firing on all cylinders. Milosavljevic provides steady rock beats while Maksimovski showboats a little with his thick and playful bass lines. The guitar adds touches and direction, but its interplay with the clarinet justifies the group's name, Kabadayas.

On its debut, Kabadayas demonstrates plenty of subtlety. With a potent combination of different musical constellations, IV is every bit is as exciting as it is intriguing.