By DAVE NATHAN
December 1, 2000
Sign in to view read count 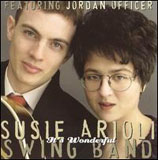 Susie Arioli is no newcomer to the vocal game having performed in and around Montreal for several years. She and her Swing Band also performed at the JVC Jazz Festival in New York. It's Wonderful is her first album as a leader and she sings music she likes. There's an emphasis on 1930's and 1940's material. But there's other stuff here as well.

On the classic standards, Arioli follows firmly in the footsteps of such singers as Billie Holiday, Maxine Sullivan, Peggy Lee and June Christy, all of whom respected the songs they chose to perform. Like the great one who preceded her, Arioli conveys the lyrics of the song with sensitivity, understanding and emotion. In other words, just what one might to expect to hear from a top flight vocal artist who knows what she's about. There's no pyrotechnics here, no swoops, no scatting just straight ahead performances with an unerring feel for the music delivered with a classically pure voice. Listen to her interpretation of "I Cover the Waterfront" which is done with a combination of mournful loneliness and hopeful anticipation. In his only appearance, Aron Doyle's trumpet noodles figures underneath Arioli to help her to set the mood. The album's coda "Blue Prelude" is reminiscent of Nancy Wilson's 1963 recording with Gerald Wilson. Arioli's version matches Wilson's for the down in the dumps feeling which comes from the "pain in my soul" caused by terminal heart break.

On the non classic standard side, "The Big Hurt" and "It's Wonderful" sound like 1950's pop tunes and something that Joni James would be comfortable singing. "Trying to Get to You "by Rockabilly Hall of Famer Rosemarie McCoy shows Arioli is at ease with that music. In fact, you can hear a bit of country swing sneak in on her renditions of "Lover Come Back to Me" and "If Dreams Come True", and it works well.

Arioli is joined on the session by her Swing Band augmented by the rhythm guitar of Jordan Officer which adds lots to the album. He plays an old style Harmony guitar which gives off a deep, resonant sound much like a bass pitched slightly higher than usual which meshes very effectively with Arioli's voice. Jordan gets a chance in the limelight as Arioli sits out on a couple of tracks. "Rueben's Blues" and "Instrumental #2" are right out of a Chet Atkins guitar song book. Officer's soloing and Arioli's vocalizing are made more eloquent by the strong presence of Michael Browne's outstanding rhythm guitar. Although they both don't play together, Arioli's group includes two bass players. Their role on this album is not a major one as they compete with Browne to set rhythmic patterns and keep time. Arioli chips in from time to time with her snare drum, an unusual side instrument for a vocalist.

This is a very entertaining CD and hopefully others will follow in the not too distant future.

If Dreams Come True; He's Funny That Way*; What Is This Thing Called Love?*; Lover Come Back to Me; It's Wonderful; I Cover the Waterfront*#; Reuben's Blues*; The Big Hurt*; Trying to Get to You*; No Smoke Blues*; I Got It Bad (and That Ain't Good); Sailboat in the Moonlight; Instrumental #2; Blues Prelude.