It's the Most Wonderful Time of the Year

By C. MICHAEL BAILEY
December 5, 2004
Sign in to view read count
My year is not complete until the Holiday Season. I am not particularly egalitarian about it. Our American Culture, for good or bad, is pretty firmly based on Judeo-Christian principals. This is fortunate in the respect that it has provided us with 2000 years of the most inspired music, composed around the birth and life of Emmanuelle. Enough of this evangelical neuter— A-Ring-A-Ding- Ding...Let it Snow!

No holiday season is complete without a Chanticleer offering. Released last year, the DVD Christmas with Chanticleer—An Orchestra of Voices captures the ensemble live in concert at New York's Metropolitan Museum of Art—Medieval Sculpture Section, where the sonics are warmly beautiful. The sound and spectacle of the concert are superb and offer the finest possible setting for the recording. The repertoire is all over the map and accurately represents the group's previous Christmas releases, detailed in Christmas with Chanticleer . Now, the listening public can have a look at America's premiere a cappella vocal ensemble in their traditional tie and tails. Their song list can be roughly divided into plainchant, Renaissance, Baroque, Spanish Baroque, Eastern Orthodox Modern, American Spiritual, and Jazz. The only thing missing from this most beautiful recital is Michael Praetorius's setting of "Es ist ein Ros entsprungen," but that is more than made up for with the group's brilliant treatment of the same's "In Dulci Jubilo." Alpha est et O?.

Hiroshima
Spirit of the Season
(Heads Up)

A perfectly acceptable contemporary jazz holiday outing as assembled only the way that Hiroshima could. The arrangements are inventive and engaging, perfectly accessible and wonderful as background music for those holiday gatherings. Spirit of the Season is a beautifully light- weight Holiday fare sporting a big-band Bossa "Rudolph the Red-Nosed Reindeer." "I'll Be Home for Christmas" is a soto voce funk fest. The Japanese instrument, the koto, looms largely on this recording, providing the disc's novelty, but never elevating the performances above simply interesting.

While not my cup of tea, The Yellowjackets submit a much better than average Holiday disc in Peace Round. For those frightened that this may be simply another anemic smooth jazz Christmas disc never fear, bassist Jimmy Haslip solos throughout, effectively lifting this disc way above the fray. Keys player Russell Ferrante is able to span a dozen genera in a single song as he does in the opening "Little Drummer Boy." The entire band executes arrangement duties, with reeds specialist Bob Mintzer taking the lion's share of the work (Mintzer being most compelling in his arrangement of "God Rest Ye Merry Gentlemen." Haslip's "Little town of Bethlehem sparkles hard like diamonds. Fashioned as a mood piece, the carol is mostly insinuated rather than presented outright, except by the bassist. Understated and beautifully constructed, "Bethlehem" stands a window into a really superb holiday treat.

This is without question my cup of tea. Noels & Carols from the Olde World is a period instrument and performance offering from America's best new period-minded Baroque orchestras, Apollo's Fire (The Cleveland Baroque Orchestra), directed by the visionary Jeannette Sorrell. Miss Sorrell and her fine band perform the familiar and unfamiliar, again expanding the repertoire of Holiday Musics with the likes of Biber's Rosary Sonatas and the traditional Spanish "Rui, Rui Chiu." The older English tunes, " Sussex Carol," The Olde Year Now Away is Fled," and "I Saw Three Ships" are highlights for both the ensemble and soprano Sandra Simon, who joined the band for the vocal selections. This recording was previously independently released by Apollo's fire and has now been picked up by Koch Classical, who has recently released the fine Scarborough Fayre: Traditional tunes from the British Isles & the New World (KOCH KIC CD 7552) and Mozart Symphony No.35 in D, K.385 (Haffner), Symphony No. 41 in C, K.551 (Jupiter) & Overture to Don Giovanni (KOCH KIC CD 7574). We can only hope for more music like this. 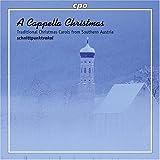 This recording is hands down the best holiday disc to cross my desk. Mannerquartett Schnittpunkvokal is an a cappella quartet consisting of Paul Paumgarten—Countertenor; Christian Paumgarten—Tenor; Michael Paumgarten—Tenor, and Josef Wagner—Bass baritone. This quartet format will definitely make American listeners think of barbershop quartets, but nothing could be further from what Mannerquartett Schnittpunkvokal. The quartet specializes here in the Austrian folk tradition of harmony. The Christmas carol offers the perfect musical and cultural vehicle for holiday harmonic expression. The quartet effectively distills old Austrian melodies and presents them in an authentic Austrian manner that it is almost crystalline. Four voices offer a clarity that is at once warm and unique, like a toasty glass of gluwein.

This is not really Christmas Music. No matter, Arvo Part is all about choral music and deserves to be included in this collection of Holiday music. While firmly established as one of the most important instrumental composers of the Twentieth Century, Estonian Arvo Pä²§ (born 1935) fully distinguished himself as a choral composer. Since 1976, Part has employed a compositional technique he labeled tintinnabuli (from the Latin: "little bells"), where the composer uses bell-like resonances in triads, underscoring a melodic voice revolving around a central key. That is the technical description. The method takes on almost a religious connotation as used by Part. Berliner Messe contains compositions elaborated with Part's tintinnabuli method. The earliest pieces are the "Cantate" and "Summa," both dating from 1977. The former was revised twenty years later into the form presented here. His "De Profundis" was composed in 1980, the "Magnificat," based on Luke's account of the Blessed Virgin's Song in 1989, and the "Beatitudes" in 1990 with revision a year later. Part's "Berlin Mass" was composed and revised in 1992, making it the most recent composition of the collection. The "Cantate" is a beautiful setting of Psalm 95 ("O sing unto the Lord a new song?") with organ accompaniment. The Mass has a traditional string accompaniment, as it was originally scored for string quartet. The setting is traditional. "De Profundis" (Psalm 129, "Out of the deep have I called unto thee, o Lord?") is one of Pä²§'s most enduring settings, having been recorded many times. Here, the Elora Festival Singers under the direction of Noel Edison provide the scripture with an light airy bed for consideration. The performance of all pieces is solid and enduring. This Naxos set competes well with the Paul Hillier ECM series. 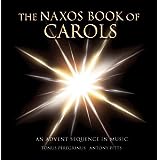 The tradition of Christmas carols is as old as Christianity itself and has given rise to many other related holiday traditions. The English have been instrumental in the evolution of carols and caroling, uniting them and Biblical Lessons into programs (as Benjamin Britten did in A Ceremony of Carols, for trumpet, voices & harp, Op. 28 in 1942). Over the past two millennia, new pieces have been added to the Christmas canon with confident regularity. Again, the British have been at the forefront of this evolution, with Christmas standards being provided by everyone from Thomas Tallis and John Taverner to John Rutter and John Tavener. With respect to this, Naxos Records commissioned an Advent Sequence of Carols from Antony Pitts and his very talented group, Tonus Peregrinus. Pitts took his commission—and using 23 canonical carols and one of his own, rearranged them, re-realized them, and grouped them into four sequences, each focusing on a different portion of the Christmas story. These arrangements are intended for widespread use and, for the most part; do not stray from the soprano, alto, tenor, baritone paradigm. The four sequences are divided on thematic lines. "The Hope" is made up of five carols highlighting the thematic dichotomy of Advent—the hope of the Messiah and the glory to Reign. "The Message" is comprised of seven carols announcing Christ's conception and birth. The six carols of "The Baby" sequence detail Luke's Second Chapter account of the birth, while the final "King of Kings" focuses on adoration of the Divine. Collectively, this sequence of carols is almost an assembled oratorio, expertly dissolved in the Spirit. 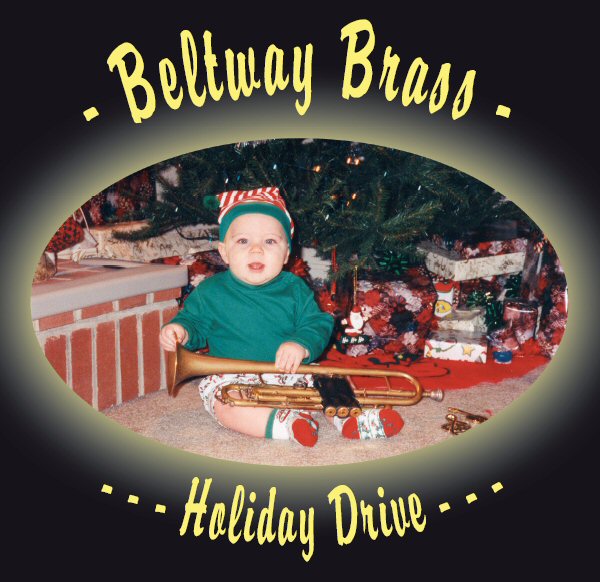 The beauty of recordings like this is the simplicity. Like a string quart or quintet, a brass ensemble's music is elementary. It is not simple-minded; the music is simply stripped to the essence so that all creative elements are naked and easily heard. Beltway Brass is not exception. This quintet takes 14 time-tested holiday carols and songs and melds each with a musical amalgam consisting of Baroque, Classical, Blues, and Jazz. The horn quintet provides a great sonic palette with which to color holiday fare. It is a happy and hopeful sound that the Beltway Brass effortlessly infuses with holiday cheer.

A super little recital of jazz guitar is Christmas Jazz Guitar. Jack Wilkins has a firm harmonic sense that enables him to make interesting songs previously rendered many, many times. Mr. Wilkins's collection is a low-impact and thoroughly non-invasive—meaning, these performances are predigested, pretty and ready for consumption. My only quibble is that the recording is only a half hour long.

A much better investment in Christmas Jazz Guitar is the one hour-plus A Jazz Guitar Christmas by Royce Campbell and his trio of bassist Tom Baldwin and drummer Howard Curtis. "Let It Snow" clocks in at a briskly played six minutes with plenty of space for guitarist Campbell. "He gets to workout again on "We Three Kings." Campbell is not afraid to venture into the free-avant-garde realm when investigating these carols and seasonal songs. This disc is a bit more challenging that the Wilkins disc, but the payoff is much greater.

Certainly, this is the most anticipated release of the holiday season. Miss Reeves has been overdue a holiday offer and she brings Christmas Time is Here with all of the power and invention as one would expect. "Little Drummer Boy" is presented as a trio of percussion, bass and voice and is tour de force. Formats like this are hard to pull off and Miss Reeves makes it look easy. She does the same with "Caroling of the Bells," a song that is hard to translate into the jazz idiom. Joe Locke's vibraphone perfectly accents the piece, providing it a snowbound feeling. Vince Guarladi's "Christmas Time is Here" is given a lazy performance, full of turkey, eggnog, and good cheer. "Christmas Song" is portrayed as the perfect ballad, Peter Martin's piano carefully pacing the piece. This is a great Christmas recording, perhaps the best since Nancy Wilson's Nancy Wilson Christmas.

Tracks: Little Drummer Boy; Carol Of The Bells; Christmastime Is Here; This Time Of The Year; Christmas Waltz; I'll Be Home For Christmas; Christ Child's Lullaby; Child Is Born, A; Christmas Song, The; 10. Let It Snow; Have Yourself A Merry Little Christmas