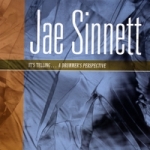 It's Telling...A Drummer's Perspective is the brain-child of powerhouse drummer/composer Jae Sinnett. The disc features eight original pieces for quartet, composed by the veteran drummer, ranging in style from hard-hitting fusion to straight-ahead bebop. The music is challenging, yet saxophonist Steve Wilson, pianist Allen Farnham and bassist Terry Burrell, all long-time Sinnett collaborators, perform flawlessly through the intricacies of odd-meters and acrobatic song structures.

As the title suggests, this is a drummer's record. Sinnett is not shy about putting himself front-and-center in the mix and cutting loose over dense vamps. As gifted a writer as he is a technician behind the kit, Sinnett cleverly creates lush textural layers that give relevance to his muscular displays. The leader's machine gun riffs in the middle of the title track are all the more dazzling on top of the syncopated ensemble interplay.

The rocked-out 7/4 groove of "Cliffhanger" contains one of the more memorable melodies from the session, as well as a jaw-dropping drum ending. The swinging "Simple Pleasures" showcases Sinnett's deep, in-the-pocket brush work. Here, the drums-up-front mix, impressive as it may be, looms a little too large over the bass and piano.

The lush melody and funky groove on "Bum's Rush" set up an inspiring alto solo by Wilson, who is quite remarkable throughout the entire disc. The veteran reedman proves why he is one of the more unique and in-demand voices in jazz today.

Farnham negotiates through odd-meters and harmonic clusters with finesse. His monstrous, tension-building solos on "Cliffhanger" and "Crescent City Undercurrents" are satisfying displays of fortitude and finesse. The pianist's gracefulness on the slow waltz "Manque" is a stand-out moment on the disc. Burrell's thick-as-a-brick electric bass rumblings keep things grounded throughout, laying a supportive foundation for Sinnett's polyrhythmic tirades. The bassist gets a chance to show off his smooth upright approach on "Simple Pleasures" with solid walking and a singing solo.

It's Telling...A Drummer's Perspective is a fresh and captivating set of music that will appeal to a wide-range of jazz listeners, not to mention drum aficionados.