Will Vinson: It's For You

By JOHN KELMAN
October 8, 2004
Sign in to view read count 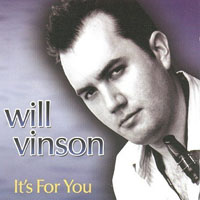 It's hard to be an up-and-coming musician these days. With the major labels either reducing their rosters drastically or shutting down their jazz operations entirely, and the independent labels struggling to make a go of it, being an unproven entity can be a real challenge. Fortunately labels like John Priestley's UK-based Sirocco Music, which still clearly concentrates on established artists including Tim Garland, Eddie Henderson and Joe Locke, are still prepared to take a chance on young artists they believe in. Last year Sirocco released Watershed , New York pianist Henry Hey's fine first release under his own name, and now it has chosen to spotlight Will Vinson, a young British saxophonist also relocated to New York and already developing quite a reputation. It's For You is an auspicious debut, an album that is as mature in its conception as it is in its execution.

Vinson, while doubling on soprano, makes the alto his main axe, and there have already been some critical comparisons to Greg Osby. To be certain, Vinson demonstrates some of the same intellectual depth as Osby, but in combination with the more visceral immediacy of tenor saxophonist Chris Potter, an artist whom Vincent cites as an influence. You know the face of jazz is changing when an artist like Potter, still only in his mid-30s, is already influencing the next generation of players, but the truth is that Potter, in his own work and as a member of the Dave Holland Quintet, is establishing himself as one of the greatest saxophonists of his generation, so it comes as no surprise that he is having a strong impact on younger players like Vinson.

Vinson is also a remarkably mature composer, with an eye to longer form compositions that are filled with twists and turns, navigating irregular meters with complete ease. "Bill-Elizibub" is an up-tempo tune based around complex stops and starts before settling into the main body, which alternates between bars of 4/4 and 3/4. Vinson's solo unwinds like a good story, gradually and saving the best for last.

As impressive as young Vinson is, equally remarkable is Aaron Parks, who spends his time split between acoustic piano and Fender Rhodes. Parks, who snagged a job with Terence Blanchard's current band a couple of years back when he was only 18 years old has, like Vinson, a surprisingly well-developed voice. Sure, there are hints of Herbie Hancock in his playing, especially on the Rhodes, but he still manages to assert his own personality, most notably on the nearly twelve-minute "Dawning," which has a certain Shorter-like cerebral air.

Equally impressive are guitarist Sandra Hempel, who manages to avoid all the obvious Scofield/Metheny/Frisell references in a refreshingly mainstream way, and bassist Thomas Morgan and drummer Mark Ferber, who support the whole proceeding in a lithe and supple way.

With compelling writing and outstanding playing all around, It's For You is a fine debut featuring a number of young artists who will undoubtedly be heard from more in the future.