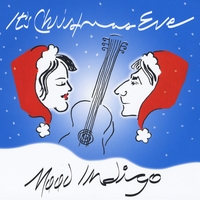 Texas-based Mood Indigo is a jazz duo composed of multiple-instrumentalists Joe Romano and Susan Elliott. The duo's music tends toward the organic "Hot Club" type: largely acoustic, and elegantly wrought. The pair's first recording, Oh, Solo Duo (Self Produced, 2001), was a well-received collection of standards delivered in a sharp, piquant style that is readily accessible and enjoyable. The same can be said for the duo's holiday offering, It's Christmas Eve.

Romano and Elliott toss a lone Celtic tune, "Gloucestershire Wassail," into their assembly of traditional holiday fare. Dating to the Middle Ages, the song celebrates both a bountiful apple harvest and the hope for an equally bountiful new year, coupled with the Yuletide celebration. Romano's robust acoustic guitar and harmonic play perfect foil to Elliot's joyful alto. Romano sings with a Broadway lyricist's voice, at once both functional and resourceful. Amid all of the "standard" Christmas tunes, "Gloucestershire Wassail" lends an antique element to the canon.