By JIM SANTELLA
October 1, 2006
Sign in to view read count 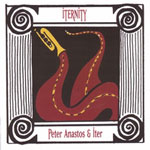 Trumpeter Peter Anastos returns to the straight-ahead form of mainstream jazz that brought us Clifford Brown, Lee Morgan, Wes Montgomery and a whole lot more. They were legends who remain with us in spirit.

With a program of original pieces, Anastos steers his acoustic sextet through impressions that honor the memory well. He and tenor saxophonist Bryan McVicker tag-team for a lyrical affair that swings forcefully while opening creative doors. Uneven in places, the session has its highs and lows. The band is at its best when driving with spirit, however, and that takes place most of the time.

Leebarebop, the trumpeter's homage to Lee Morgan, rides a wave of sassy swing, while "Walkin' to the Norm strides confidently with the kind of welcome demeanor that pumps up your day. Positive glows abound. "DeCoy, the composer's homage to McCoy Tyner, features pianist Jason Martineau in a percussive affair, while "On the Brink loads up on fine teamwork.

Anastos brings a bright, thin, trumpet tone to the session. When he works with tenor sax, the two voices meld seamlessly as if they were one. When he works with soprano sax, however, the rift is evident. The band's driving tempo keeps things moving in such a way that their forceful action speaks for itself. Expressive through his original compositions and filled with an anxious desire to honor the forefathers of today's mainstream, Peter Anastos & Iter groove with a genuine spirit.