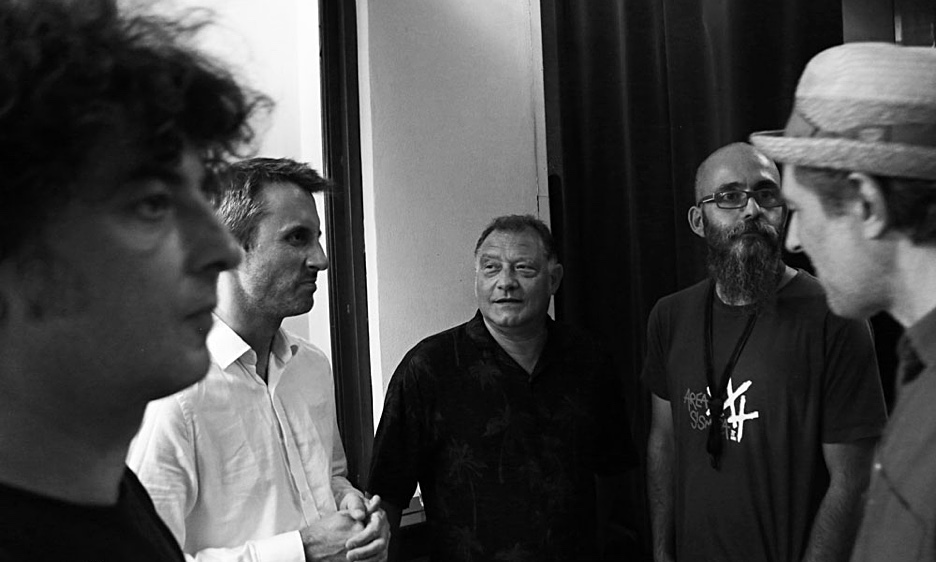 At a time when the ideals of unity and transnational solidarity that represented the founding values of modern-day Europe seem to be faltering under the pressure of a contagious strain of neo-know-nothing populism, events like the annual conference of the European Jazz Network (EJN) provide a tangible (and much needed) reminder of what can be achieved through cultural cross-pollination, social engagement and a shared vision.

Driven by a desire to observe, learn from each-other and exchange experiences, almost four hundred artistic directors and cultural operators from 39 countries descended on Novara, the Instagram-perfect rice growing capital of Italy, comfortably located half-way between Milan and Turin. A first-rate program awaited them.

For an account of the Conference, read Ian Patterson's article. What follows here is an overview of the musical side of the proceedings, which took place from the 11th to the 15th of September and reflected certain themes addressed by the Conference panels (gender balance, social inclusion, environmental responsibility).

A large number of musical events had been lined up to showcase some of the most compelling projects on today's vibrant Italian jazz and improvised music scene. The performances were grouped into two programs: six concerts under the "Italian Showcase Festival" banner and 10 in the "Fringe Program." The Italian Showcase Festival was curated by EJN's Programme Committee whereas the Fringe Program was the brainchild of the Novara Jazz Festival's artistic committee, consisting of Corrado Beldì, Enrico Bettinello and Riccardo Cigolotti, in partnership with the minds behind Milan's Ah-Um Festival, Rome's Fondazione Musica per Roma and Parco della Musica Records, the Sardinian Festival Musica sulle Bocche, the 360-degree label nusica.org, ParmaJazz Frontiere Festival, Puglia Sounds Export, a publicly-funded project aimed at promoting the visibility of music from the Apulia region, within the framework of I-Jazz, an association of Italian jazz festival mandated with the promotion of Italian jazz abroad.

Did Novara answer the question "how does Italian jazz sound today?"—a curiosity that no doubt the foreign contingent of attendees must have had in mind while travelling to Novara? Given the high-level of a scene that is literally bursting at the seams in terms of range, quantity and quality, no single festival could aspire to showcase it all, from Dixieland to Improv, in just five days. The labor of love behind Novara's artistic curation must have required difficult choices and a good deal of strategic fine-tuning. It certainly succeeded in drawing attention to a well-chosen selection of Italian young talents and two of their most acclaimed putative fathers, veterans Franco D'Andrea and Roberto Ottaviano. As a result, the festival shed light on musicians that deserve wider recognition abroad and are well-suited for the international limelight.

With the subtle grace of consummate hosts, the organizers created the conditions needed to explore the continuum that exists between Italian jazz and the environment that nurtures it. There can be no better way to appreciate music than experiencing it where the musicians create it, savoring the food they eat, sipping the wines they drink, and enjoying the same sights that inspire them. Perfectly framed within a dense multisensory program (which also included cultural tours and culinary explorations—a signature feature of all Novara Jazz Festivals), "live music" acquired a much deeper meaning, and adhered to the theme of this year's Conference: "Feed Your Soul." Joining fellow music enthusiasts in both musical and non-musical activities promoted a sense of camaraderie and community that grew day by day. Friendships were born, or cemented, inside Novara's ancient and not-so-ancient music venues, around communal lunch and dinner tables or during impromptu discussions under well- preserved colonnades or in medieval cloisters.

The music heard in Novara seemed to perfectly mirror certain aspects of the contemporary Italian psyche. As such, it illustrated what Italians are like, rather than just showcasing their musical production. It is from this vantage point that I will try to outline certain threads that ran through the two concert programs, rather than delving into a concert-by-concert chronicle.

Taken as a whole, Italian jazz is much richer than its stereotypical perceptions suggest. All stereotypes start from a grain of truth but generate a fast and offhand simplification of reality in which most (if not all) nuances vanish. And so, of course, there were melodic traits in the performances of the likes of Mirko Signorile and Filippo Vignato. Melodicism crept even in some of the most intricate passages of Federica Michisanti's Horn Trio. It is equally undeniable that the music of Enzo Favata and Gianluca Petrella was tinged, more or less heavily, with Mediterranean accents. But all of these projects were much more than that, from the cinematic, feel-good, head-bobbing, electro-acoustic jazz of Mirko Signorile Trio Trip to the tight rhythmic work of Favata's top-notch band, characterized by the kinetic vibraphone of Pasquale Mirra and the tight interplay between Rosa Brunello's bass and U.T. Gandhi's drums.

This is because contemporary Italian musicians have long been looking beyond their Mediterranean roots. Their interests go South, North and all across the globe. Roberto Ottaviano paid tribute to the African (especially South-African) roots of modern forward- looking European jazz with a stellar Anglo-Italian line up featuring Alexander Hawkins on piano, Marco Colonna on clarinets, Giorgio Vendola on bass and Zeno De Rossi on drums. With their fiery interplay and mix of catchy originals and compelling renditions of compositions by Abdullah Ibrahim, Don Cherry or Dewey Redman, the quintet tore the roof off the Piccolo Caccia Theater, in what might have been the festival's high point. In her solo performance Rosa Brunello built a bridge between African ancestral rhythms and electronica with the eloquence of a skilled story-teller. Favata hopped from Ethiopian jazz to Mediterranean lullabies. O-Janà's bewitching set came across as a crafty encounter of Southern storytelling and Nordic soundscapes.

Italians tend to enjoy integration over integralism, as evidenced—among other things—by the fact that electro-acoustic projects outnumbered purely acoustic or purely electronic bands. Even in some of the most plugged-in projects, electronics were never applied to numbing effect. Rather, loops, glitches and other electronic paraphernalia were used to discreetly widen the sonic palette—as one could have easily expected in a band led by the Italian master of "jazz synthesis," Franco D'Andrea. In other cases, they were utilized to frame, or provide a dynamic counterpoint to, acoustic atmospheres, like in the original work of O-Janà or the solo performances of violinist Eloisa Manera and Rosa Brunello.

Italians tend to be radical in their lack of radicalism. They are rarely "in your face," and rarely is their jazz. Most of the performances in Novara started rather unassumingly, only to grow tune by tune, gently welcoming the listener into a space that was hospitable, cozy and difficult to leave. One was left longing for more, experiencing the sonic equivalent of the old Italian adage that it is much healthier to leave the dinner table with a tiny bit of hunger rather than a full belly. Take the low-simmering cinematic atmospheres and crescendos of the Mirko Signorile-Raffaele Casarano duo, the wide-open dreamscapes of Filippo Vignato's Quartet or the elegant syncretism of Franco D'Andrea's Octet. The best example in this regard, however, might have come from Federica Michisanti's Horn Trio in which the leader's bass, Francesco Bigoni's reeds and Francesco Lento's trumpet and flugelhorn interacted in quasi-Motian- esque wide-open spaces. Proceeding as like-minded sound-alchemists, these musicians displayed their signature band-sound, with gentle determination, democratic freedom and superlative interplay. In doing so, they seemed to embody the radicalism of the slow-food movement in a fast-food society. There could have hardly been a better close for the festival than their "(out of the) chamber jazz" (i.e. chamber jazz played outdoors, under the sun in a medieval cloister).

The other side of this lack of an 'in your face' attitude is a certain reserved nature these musicians have about self-promotion, whereby the hang is preferred to the aggressive business card exchange one would witness at other latitudes, in the belief that building a true rapport is a better long-term strategy.

Italians love what comes from abroad sometimes more than what comes from Italy. The English lyrics sung by O-Janà's Ludovica Manzo, Camilla Battaglia's tribute to the poetry of Sylvia Plath and the philosophical theories of Heidegger and Nietzsche, or Andrea Grassi's and Gaia Mattiuzzi's adaptation of Emily Dickinson's or E.E. Cummings' verses might be just the most obvious examples of this penchant for xenophilia. In a jazz context, however, this attitude makes for a highly-exportable brand of music. Blindfolded in front of Camilla Battaglia's blend of jazz and modern music, or the angular and catchy lines of the XY Quartet a listener could easily be fooled into thinking s/he was in a Brooklyn jazz club. If Tim Berne and Henry Threadgill had a child after sipping a Spritz in Venice, that child would sound very close to multi-instrumentalist Piero Bittolo Bon. His brass-centric "Bread and Fox" Quintet was easily one of the highlights of the festival thanks to the enthrallingly intricate synergy between the leader and trombonist Filippo Vignato above the relentless backdrop of Glauco Benedetti's tuba, Alfonso Santimone's piano and electronics and Andrea Grillini's drums. This band can deliver fire, but also knows how to stretch at mid-tempo. Despite being a power-quintet, they're not hurried, they know how to take their time—thus embodying another Italian distinctive trait—and carry the listener along, as they build their inexorable crescendos. If Italian cosmopolitanism sounds so good, Salvini might very well be in trouble. 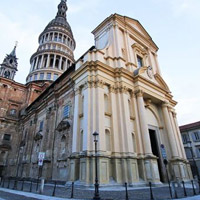