By BRUCE LINDSAY
August 4, 2014
Sign in to view read count 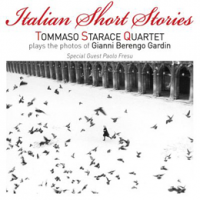 Some musicians appear to conjure their tunes from thin air, others work with raw material furnished by the great composers, still others take their inspirations from many different sources and give them due acknowledgement. Saxophonist Tommaso Starace is in the latter camp. This lyrical, engaging, player's second album, Tommaso Starace Plays The Photos Of Elliot Erwitt (Frame Records, 2006), drew on eight photographs by this master of the camera. For Italian Short Stories Starace returns to this source of inspiration. These are short stories from a very particular Italian—photographer Gianni Berengo Gardin—and they inspire Starace's most ambitious album to date.

The photographs that inspired Starace appear in the rather lavish CD booklet. They display melancholy and nostalgia ("Echos Of Naples" from 1958, "The Bubble Vendor" from 1960); the joy of the fair ("Let The Magic Begin," 2000) or of dancing ("Recollection," 1958); the smile of a young child as she stares into a car full of sheep ("The Amused Gypsy Girl," 1966). Strangest of all is the oddly unsettling picture of young boys wearing cut-out animal masks ("Olivetti's Touch," 1974).

Starace's musical responses are varied. "Recollection" opens with a snatch of scratchy old '78, an unidentified male singer straight out of a long-forgotten music hall show. Starace's first appearance is on soprano, a bright, flowing sound that readily reflects the photo's subjects—Michele Di Toro's sparkling solo also captures the movements of the young dancing couple. "Olivetti's Touch" is a sprightly soprano/piano duet, filled with the optimism of childhood—absolutely no indication that Starace is unsettled by the mask-clad youngsters.

"Jamme!" responds to Gardin's photo of two men and a boy zooming through Naples on a motor scooter with an up-tempo slice of post-bop jazz. Drummer Tommy Bradascio and bassist Attilio Zanchi drive the tune, Di Toro punctuates with emphatic chords and Starace and guest musician Paolo Fresu energetically trade phrases. It's just a quintet, but the full-on sound wouldn't shame a Charles Mingus big band. "The Amused Gypsy Girl" is the album's other high energy tune, Starace's sprightly alto lead line owing much to "Salt Peanuts." In contrast, "Interius Tranquilitas" is as tranquil as the title suggests, a feature for Zanchi's confident yet gentle bass solo.

ADVERTISEMENT
One tune each from Di Toro, Zanchi and Bradascio, plus Maurice Ravel's "Adagio Assai," complete a strongly melodic collection. The old cliché about pictures being worth a thousand words may well have some truth to it—but on Italian Short Stories Gardin's pictures, like Erwitt's before them, find new life in these instrumentals.