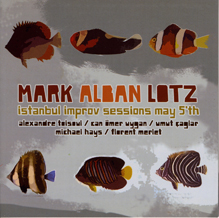 Istanbul Improv Sessions May 5th is an apt, if rather prosaic, title for this collection of improvisations, all of which were recorded in one day during 2010 in Istanbul. The leader and producer of the sessions is flautist Mark Alban Lotz, a German-born resident of Holland with over a dozen albums to his name. Lotz' collaborators all come from the Istanbul improvisation scene which, on the evidence of this album, seems to be full of invention, ability and humor.

Lotz is an emphatic presence across all ten tracks, with the other musicians joining him in an array of combinations from duets to sextets. This variation in lineups helps to ensure an ever-shifting set of moods and sounds. There's the almost laugh-out-loud humor of "Soroaster" and Roland Kirk tribute "R.R.K Rahasaan" both featuring Michael Hays on bass and some uncredited vocalizing, the tensions of "North Star" or "Ursuppe," and the light-heartedness of "Animal Rites" with its mix of Alexandre Toisoul's clarinet, Lotz' flute and Can Ömer Uygan's trumpet.

Much of the contrast in mood is due to the use of effects and electric guitar to create tension and mystery—Umut Çağlar's rasping, metallic, guitar makes parts of "Küsendem" and "Open Air Party" genuinely unsettling. The improvisations that are wholly performed on acoustic instruments are generally lighter and more welcoming. "Dr. No" is the exception: a spacious duet on which Lotz' hard-toned flute and Florent Merlet's sparse percussion set up an almost threatening atmosphere.

Lotz's Bite! (LopLop Records, 2009) was inspired by fish. While this album sports a similar fish-related cover design, the music has no such inspiration, but it's filled with inventive improvisations nonetheless. At times troubling, at others funny and warm, the music on Istanbul Improv Sessions May 5th has impressive depth and richness.