By EDWARD BLANCO
February 29, 2016
Sign in to view read count 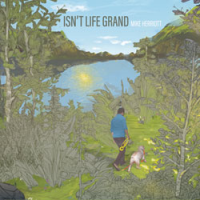 Canadian Award-winning trumpeter Mike Herriott is not only a prolific composer and arranger, he is a gifted multi-instrumentalist capable of writing, arranging and performing all of the music in an astounding one-person virtual band and does something similar to this on his seventh album as leader with the outstanding Isn't Life Grand. Taken from a track from his first album Free At Last (Boathouse, 1995), the album title track is an original piece that was arranged by the great Canadian trumpeter and composer Kenny Wheeler and is presented here in memory of the late trumpeter, as well as for Vancouver pianist and saxophonist Ross Taggart and drummer/educator Keith Copeland who also performed on that 1995 recording and are no longer with us.

Though, the music contains some elements of bebop and funk, the album is primarily a project of straight ahead mainstream swing in an eight-piece selection of propulsive originals. Recorded with only five players and not all appearing on the same tracks, Herriott produces a big band sound with works for brass and rhythm because of his ability to perform on several instruments (trumpets, flugelhorn, and trombone, French horn, piano and bass). The result of course, is a terrific orchestrations from what seems to be from a light ensemble but isn't.

In celebration of the lives of past musical collaborators, the title track kicks off the program with the sounds of a high-pitch trumpet, soaring brass and pounding percussions from Richard Moore carrying the tune. The second track begins a very atmospheric three-part movement in dedication of his best friend (Sparky, the dog) starting off with "My Blind Dog," and followed by the soft melancholy "The Ball That Got Away,' and finishing with lively quick-tempo burner of "The Chase" featuring Herriott on muted and regular horn in what turns out to be the standout piece of the album.

Herriott features only the brass on the light "12-4-4" in what he claims is "a simple twelve-tone piece for four brass voices" all performed of course, by Herriott himself. The very perky fast-moving "Up To No Good," is another mainstream swinger of a tune that showcases the leader on a fine trombone statement. With the help of Dave Reid on bass trombone, Herriott reprises a piece from his debut album on the mid-tempo "Free At Last" featuring the leader on both the flugelhorn and trombone.

This amazing album closes with the funkiest track of the set on the electrifying "Gravity" highlighting Bob Sutherby on guitar and the man on both the electrified flugelhorn and fretless bass instruments in a hard-driving and charging finale that leaves a positive impression on all who have the good fortune to have sampled it. For those who can appreciate superb contemporary jazz played straight, Isn't Life Grand is a hidden gem of an album that sparkles all over. A remarkable offering from multi-instrumental artist Mike Herriott, this one-man musical production is certain to make some waves, well done!