By IAN PATTERSON
October 1, 2012
Sign in to view read count 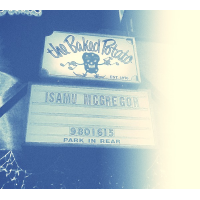 Keyboardist Isamu McGregor has fairly raced out of the blocks, playing or recording with guitarist Wayne Krantz, saxophonist Chris Potter, drummer Ari Hoenig, bassist James Genus, pianist Jean-Michel Pilc, vibraphonist Stefon Harris and vocalist Jimmy Scott—to name but a few—while still just 22 years old. His debut as leader sees him lead his energetic quartet through territory that runs from funk to jam-band workout and from rock to jazz-fusion. All-original compositions bar one, the tracks vary between nine and fourteen minutes in the main, allowing room for maneuver, with extended vamps and adventurous soloing aplenty.

"Rainbows in Transit" gets the set off to a flyer. McGregor's touch on electric piano reveals Herbie Hancock's influence and he engineers a strong groove. Bassist Even Marien and McGregor lay down a repeating motif as the group momentum builds, driven by drummer Gene Coye's cymbal-punctuated rhythms. Versatile guitarist Deen Anbar moves from bluesy John Scofield-esque bite to metal-colored fluidity. The more spacious "A Simple Science" stems from simple bass and guitar motifs; McGregor jams on a riff, working it until inspiration leads him out, into a freer mode. There's a sense of the quartet waiting to break loose and, briefly at song's end, a heavy metal vamp allows just that release.

ADVERTISEMENT
The ethereal intro to "When The Lights Fell from the Sky," with keyboards as soft as vibraphone, singing guitar tremolo and lyrical fretless bass, shows that there is a also great sensitivity in McGregor's songwriting. However, at four minutes there is liftoff, with bass leading the way. McGregor's extended solo—accompanied initially only by drums—flits between lightning-fast glissandos and jam-like riffing. When the quartet members slip in a hard groove is established and a drum feature rounds off a driving number. The Philadelphia Experiment's "Grover" pays overt tribute to saxophonist and jazz-funk/r&b legend Grover Washington Jr. circa Mr. Magic (Kudu Records, 1975), with McGregor's feathery blues playing Bob James to Anbar's Eric Gale. Both solo passionately—as does Marien— on this heartfelt dedication.

"Theme Music from a Super Slow-Motion Fight Scene" is a gutsy jam-band workout, with Anbar the absolute star of the show. "You and Your Milky Ways" begins with a swirling, delightfully delicate Joe Zawinul-esque solo from McGregor before morphing into slightly one-dimensional funk jam. "Urban Dragon Slayers" is a hugely enjoyable rock number, featuring a quite epic guitar solo of Frank Zappa-esque proportions. The highly melodic "Big Sky"—with McGregor's solo the striking centerpiece—closes an impressive live performance.

Firmly established in New York as a keyboard player for hire—in just about any setting imaginable—McGregor is just starting out as a leader. Live at the Baked Potato! is a fine document of a stirring performance, but It will be really interesting to see a studio recording from McGregor, one which distills his ideas and arresting playing into more succinct, refined form. A bright talent, and a name from whom we're sure to hear a lot more.

Rainbows in Transit; A Simple Science; When the Light Fell from the Sky; Grover; Theme Music for a Super Slow-Motion Fight Scene; You and your Milky Ways; Urban Dragon Slayers; Big Sky.