Karen Power: Is it raining while you listen 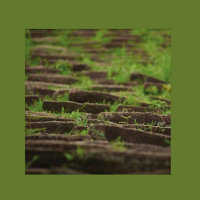 Is it raining while you listen is the first CD release by the award-winning Irish composer Karen Power. It consists of eight compositions dating back to 2007, including one stereo tape-only piece, "Forever ricefields," created specially for the CD release, based on field recordings made in southern Laos. Other tracks combine tape with live musicians, recorded in Ireland or at events around the world. Judging by the locations—including Japan, Germany, Portugal—it is clear that Power is much in demand and must clock up the air miles...

Straight from the beginning of the opening track, "Hang on, I'm not ready for a pig yet" (yes, some of the track titles are works of art in themselves) it is apparent that Power is adept at employing tape in ways that are far from obvious and that subtly enhance the sounds and music originating from an acoustic instrument without attracting attention away from it. The piece pairs Power's tape with Irish baroque violinist Claire Duff, the tape featuring recordings of Duff's playing so that the recorded and actual instruments fit seamlessly together. The end result is a multifaceted view of Duff's instrument and her playing that is taut and gripping, in fact sounding anything but baroque. If Picasso had painted with music, his cubist version of a violin would probably have sounded just like this. A stunning start to the album.

Next up, "The colourful digestive palette of slugs" (see what I mean?) centres around an engaging live duet between bass clarinet and piano played by the SCAW duo. Across its nine minutes the piece is highly episodic with frequent punctuating silences that heighten the tension and atmosphere inherent in the music. As before, Power concentrates on showcasing the instruments to best advantage, often letting single notes linger and resound to be savoured for as long as possible. The album's title track is another live recording, this time of the Japanese flute-piano-violin trio Mmm. Its prolonged violin glissandi offset by dramatic piano chords create an irresistibly beautiful soundscape that remorselessly draws the listener in. The trio is well named—Mmmm, indeed.

In stark contrast to the preceding tracks, "Flies who dreamt of more than windscreens" and "Forever ricefields" both shift the balance to give greater emphasis to the role of tape. The former is an improvised piece for the clarinet, cello and trombone of Quiet Music Ensemble, with the taped sounds of wine, brandy and champagne glasses being used effectively as an environment in which to improvise; Power herself has history as an improviser and that has made her sensitive to the requirements of an improvising environment, namely that it be supportive but unobtrusive. The latter piece consists solely of the taped sounds of a Laotian paddy field, including cowbells, animal sounds and human activity, all subtly enhanced by Power to emphasise their reality, the end result radiating tranquility and being quite mesmerising.

Across its eight tracks, this album covers a broad spectrum of musicians, sounds and moods, but they combine together into a work that hangs together perfectly and is unmistakably the product of one creative mind. The tracks are diverse enough to make comparisons between them impossible and meaningless. They are so consistently strong that every day makes a different one favourite; but why choose when they are all so good? In typical form, the album concludes with a track that is different again; from 2007, "Fried rice, curried chips and a diet coke" is a multi-layered collage of electronically altered and distorted voices and tones that achieves a chilling and alienating sense of otherness. While it is not as warm as much that has gone before, in its own way it is just as impressive.

Is it raining while you listen is a first rate debut that whets the appetite for far more from Karen Power. Beautifully packaged, it is available in an edition limited to 500 copies that is sure to be much in demand. You have been warned.

Hang on, I’m not ready for a pig yet; The colourful digestive palette of slugs; Is it raining while you listen; Flies who dreamt of more than windscreens; Forever ricefields; Relocating elk...by train; Squeeze birds to improve your garden's plant variety; Fried rice, curried chip and a diet coke.

Title: Is it raining while you listen | Year Released: 2015 | Record Label: Farpoint Recordings