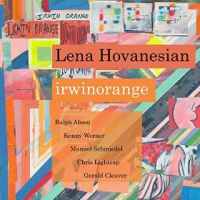 In assigning colors to a musician's "sound," does alto saxophonist Lena Hovanesian blow orange? Maybe. On her debut CD, irwinorange, the title taken from the 2014 Franklin Evans' painting of the same name, Hovanesian's alto has a citrus-y tang, as she explores, sonically, her love of abstract art and natural beauty of Hawaii and her native California.

Hovanesian employs some of New York City's finest forward-thinking jazz players in her ruminations—it's an all original set—on Hawaii's "Waimea Valley," California's "Redwood Tree," and the art of "Richard Jackson" and Franklin Evans. Of those irwinorange collaborators, none is more esteemed than pianist Kenny Werner, who sits in on three tunes, including the tranquil and beautiful opener, "Waimea Valley," after the green and restful Oahu nature spot just back from the famous surf beach, Waimea Bay. The music begins with a alto sax/piano duet, gentle trade winds underlain by the cool stream dropping off a verdant cliff to create a tropical waterfall.

"Kailani" throbs in on a Chris Lightcap's bass heartbeat. Manuel Schmiedel piano wanders and drifts, slipping into a repetitive comp behind Lightcap's bass solo, leading into the mesmerizing unison horn work of Hovanesian and Ralph Alessi, a sound reminiscent of the Miles Davis/Wayne shorter teaming on Nefertiti (Columbia Records, 1967).

"Left Field" features Alessi's circuitous solo. There is a nice contrast to his and the leader's horn styles. Alessi is a sharp knife cutting silver arcs through the air. Hovanesian, especially here on "Left Field," smolders after an eerie intro, backed by the fluid elegance of Kenny Werner's keyboard.

Hovanesian proves herself an exceptional instrumentalist throughout, whether investigating the stateliness and grandeur of the "Redwood Tree" or the green/blue serenity of undersea life, on "Anthias Fish." And she draws great performances from her distinguished sidemen, and writes surprisingly mature, off-center tunes that command the listener's attention from start to finish. You can't start out a recording career much better than the young saxophonist does on irwinorange