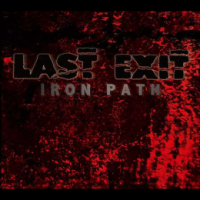 In saxophonist Peter Brötzmann's interview memoir We Thought We Could Change The World (Wolke Verlag Hofheim, 2014) he spoke about meeting Sonny Sharrock in Berlin 1969, when the guitarist was working for Herbie Mann. Brotzmann never forgot the meeting, and when bassist Bill Laswell conceived the idea of Last Exit in the mid-1980s, Sharrock was on the wish list. So, too, was Ronald Shannon Jackson, the former drummer for Albert Ayler in the 1960s, he "had some kind of voodoo," that appealed to the saxophonist.

The band was the jazz equivalent of heavy metal, except, unlike rock musicians, these cats could improvise. Their concept was one of a touring hardcore band, playing fast and loud confrontational music. All of their releases before Iron Path were live dates, the self-titled 1986 Enemy Records recording, The Noise Of Trouble (Live In Tokyo) (Enemy Records, 1987) with Herbie Hancock and Akira Sakata, Cassette Recordings 87 (Enemy Records, 1987). Almost all of their work is out-of-print, except the reissued Koln (Atavistic, 2005) and the 1989 Headfirst Into the Flames (DMG/ARC, 2005).

Iron Path originally released on Virgin Records in 1988, is the clearest statement the band produced. Credit Laswell,who had worked as a producer for Herbie Hancock -Future Shock (Columbia, 1983), Iggy Pop, and Motörhead. The convergence of these three giants of sound, even for these short seven years is a godsend. Brotzmann toured a couple times with Sharrock as a duo, their only document is the find Whatthefuckdoyouwant (Trost, 2014). Combined, the pair could produce enough sound to knock walls down. It was the rhythmic bulwark of Laswell's baselines and the pulse of Jackson's drumming which fueled his Decoding Society that made this band radiate. These ten shortish studio pieces (the longest 4:54) weave between Oriental themes, surf-metal, speed metal blues, floppy funk, and hardcore thunder. Sharrock, who passed away in 1994, displays the talent that was coveted by the likes of Miles Davis and Pharoah Sanders, and Brotzmann is eternally Brotzmann, blowing an ocean liner horn from his baritone or tearing chunks of tenor madness first heard on his Machine Gun sessions. Sadly, Jackson is also gone, like Sharrock, his free jazz voice never duplicated.