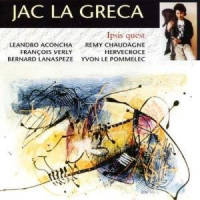 Ah buddy, this is one of those CDs you open, hit play and immediately you think, "Awesome, simply awesome! This a keeper!" La Greca and a stellar group of musicians make this one of the finest fusion releases out of France, (or the globe), I have had the joy of discovering.

La Greca plays guitars and guitar-synth in a very capable Holdsworthian fashion. The compositions flow smoothly and yet vary all over the time sig and mood map. You will hear a bit of mellow John Themis guitar stylings on "La Violoncelliste Contemporaine" but still with that Holdsworth structuring of chordal passages.

La Greca is incredibly slick and poised in his very jazzy approach to fusion. Right next to him in a inspiringly fluid handling of keyboards and piano is the formidable talent of Leandro Aconcha. Wow! Never boring but dazzling and tight on great bass lines are Remy Chaudagne, Yvon Le Pommelec, and Bernard Lanaspeze. François Verly and Herve Croce offer superb drumming to keep it all pumping, sliding, and flying along.

Song compositions are all interesting and well-paced. On "Formule Magique" La Greca nearly re-creates that wildly singular "Synthaxe" sound and super-speed riffing of Holdsworth's Atavachron release. Amazing echoes of past fusion greats fill this nine song release. I am eager to hear what La Greca will create next. Highest recommendations!