By JAKOB BAEKGAARD
September 30, 2009
Sign in to view read count 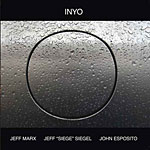 Experiment with form lies at the heart of everything pianist John Esposito plays or composes. Whether he's exploring and redefining the language of the standard with his trio or writing for a large ensemble as on A Book of Five Rings (Sunjump, 2008), he has the ability to immerse himself completely in the form that's explored. This is also the case with Inyo, which is a collaboration with saxophonist Jeff Marx and drummer Jeff Siegel—both of whom played with Esposito in the group Second Sight.

Inyo takes its title from the Japanese and refers to the male and female principles that are known in Eastern philosophy as Yin and Yang. It's a very fitting title because if there's something that the album does, it is to unite unlikely opposites. Thus, the sound on the album could best be described as unquiet meditations or chaotic lyricism.

The key to understanding the challenging textures of Inyo, coming across as both melodically inviting and intellectually difficult, lies in the combination of instruments. The lack of a bass gives a decidedly more free feeling, with Esposito alternating between playing the bass patterns on the keys and painting abstract blocks of chords. However, the musical initiative changes all the time among the participants.

"Crescent Sound" starts off with Siegel entering the eye of the hurricane with a large battery of percussion sounds before saxophonist Jeff Marx takes some bold flights on the saxophone, as Esposito moves to the background.

"Chuckster" is humorous march, merging sly saxophone and semi-ragtime musings, while "Upward Decent," whose title itself is a paradox, combines a funky beat with Esposito's impromptu piano voicings.

"Horizon" ends the album, however, on a thoughtful note, with Marx's curling, windy lines and the soft tones of the piano falling like drops of rain from a tree. This is, to stay in the Eastern terminology, a true moment of musical Zen created by three masterful musicians.