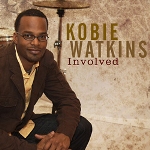 Perhaps the title to drummer Kobie Watkins' debut, Involved, makes reference to the Chicago native's involvement with some of the highest profile jazz artists around. A regular in the bands of saxophonist Sonny Rollins, guitarist Bobby Broom, and vocalist Kurt Elling, Watkins has proven himself a stand-out accompanist, possessing a confident blend of fire and sensitivity. With a slew of fellow Chicagoans, including Broom, trumpeter Pharez Whitted, and saxophonist Geof Bradfield, Watkins blends straight-ahead blowing and unabashed funk to create an energized set of groove-heavy jazz.

While Watkins' drumming is not the front-and-center focus of the disc, his dominating presence is undeniable on the up-tempo burners "Spastic" and "Third Pew." The latter is a gospel-meets-bebop rampage featuring Whitted, trombonist Terris Ransom, and pianist/organist James Austin. Mim's odd-metered, Afro-Cuban influenced "Congo" showcases the multi-faceted drummer's fearless approach to polyphonic exploration.

With a release as stunning as Involved—along with a recent relocation to New York—Watkins is likely to further his appeal as a drummer and composer worthy of wide recognition.