By JOHN KELMAN
September 15, 2007
Sign in to view read count 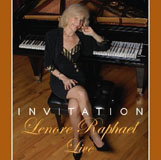 Sometimes it's not necessary to break new ground; sometimes all that's required is to be honest, unassuming and deeply committed to the music.

Pianist Lenore Raphael has been building, over the course of four previous albums, a solid discography that sits smack dab in the middle of the jazz mainstream. With bassist Hilliard Greene and drummer Rudy Lawless back from A Beautiful Friendship (Swingin' Fox, 2005), Raphael goes live with Invitation: Lenore Raphael Live, recorded at St. Michael's Theater in New York City. It's an album that won't rattle any musical cages, but that doesn't make it any less enjoyable.

While Raphael is a strong study of a wealth of iconic pianists including Bill Evans, Thelonious Monk and Bud Powell, it's the spirit of Oscar Peterson that sits atop this session. One doesn't need to know the title to realize that she's paying tribute to the legendary Canadian pianist on her own "Blues for O.P. With Greene and Lawless swinging in confident support, Raphael's combination of virtuosity and firm yet elegant touch is the best kind of homage, where the reference is clear but there's still a personal voice at play.

"Birds in Flight, the only other original of the set, is another playful medium-tempo swinger that, along with Raphael's focused and chord-rich solo, features a full-bodied and idea-filled feature for Greene and some fine brushwork by Lawless.

Whether it's burning harder on the Kern/Harbach classic "Yesterdays, an ambling look at the Kaper/Webster title track or a gentle take on Washington/Young's "My Foolish Heart, the chemistry that's evolved between Raphael, Greene and Lawless over the past couple of years is palpable, but often in the subtlest of fashions. The trio isn't afraid to stretch things out, as it does on "My Foolish Heart and Rogers/Hart's "Have You Met Miss Jones, featuring a short but context-setting intro by Raphael. Still, they know when to keep things short and not overstay their welcome, with Sonny Rollins' enduring "Oleo —the most buoyant track of the set—taken at a brisk clip, seemingly over before it's started, but lean, mean and perfect.

While a new piano trio outing consisting largely of well-known standards is nearly a daily occurrence these days, there's still a way to differentiate between those who are simply mining familiar territory and those who truly feel it. Raphael and her trio are clearly in the latter camp, making Invitation: Lenore Raphael Live a thoroughly enjoyable album of mainstream jazz that's sure to please those who like their jazz straight-ahead, traditional and swinging.

Yesterdays; Blues for O.P.; Invitation; My Foolish Heart; They Can