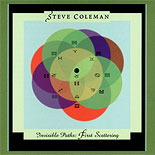 To admire the music of saxophonist Steve Coleman is, indeed to admire the man. From his origins as a Chicago musician to his current life full of exploration of philosophy, musicology, symbols, and language, he has kept a directness and lucidity about his musical presentation.

Invisible Paths: First Scattering is his first solo session, coming twenty-some years after he co-founded the M-Base collective that included (among many others) Greg Osby, Ravi Coltrane, Robin Eubanks, and Jean-Paul Bourelly. He did record a hard-to-find duo once with bassist Dave Holland in 1991, Phase-Space (DIW, 1994.

Like the duo, this disc presents Coleman up front and with a clear manifest. Then again, his voice is almost instantly recognizable on all his recordings. This ambitious solo effort doesn't rework standards of the familiar jazz canon as much as it presents Coleman's music stripped of that familiar odd metered drumming and rhythms.

Those familiar with Coleman's work will "hear the rhythm section in these unaccompanied tracks. As he is known to do, he begins a track propelling the music; it's just that the rhythm section never steps in. You know (and feel) that his familiar time signatures are driving this music forward. He even accompanies a bit of clapping with wordless rhythm sound to open "Fecundation: 070118 and offers a spoken "bom-bom refrain to his horn on "Facing West. Elsewhere he offers a bit of meandering improvisation on "Embodiment, grabbing bit of ballads and tones to pave a roadmap.

These sixteen tracks stay true to the music of Steve Coleman. His style, recognizably showcased here as the skeleton upon which he hangs the body of his ever expanding work.