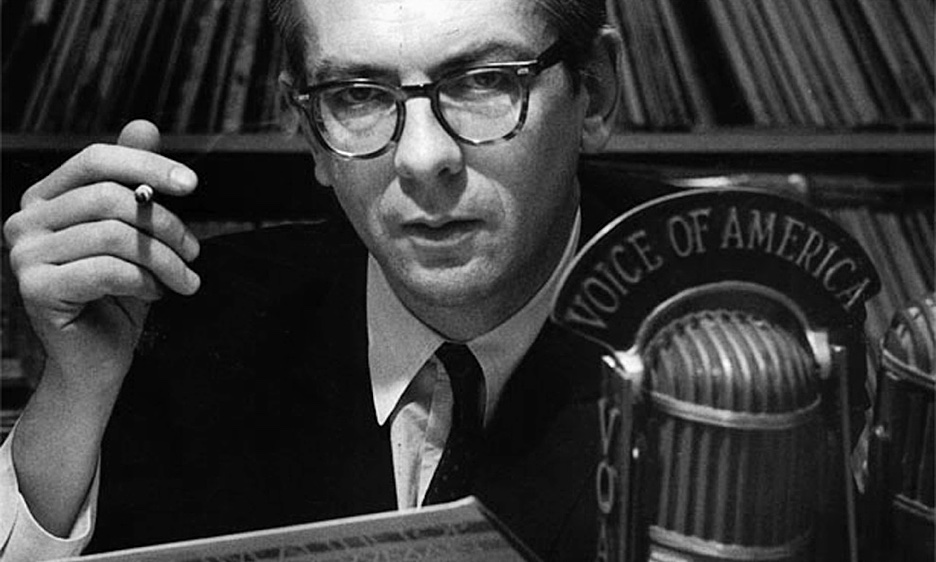 Jazz is a classical parallel to our American political and social system. We agree in advance on the laws…we are free to do whatever we wish within those constraints. It’s the same with jazz. —Willis Conover

Willis Conover stood with a cordoned off pool of reporters and photographers, being kept at arms-length from celebrities and dignitaries on the White House lawn. There was no table assigned to him at Bill Clinton's 1993 celebration of the fortieth anniversary of the Newport Jazz Festival though Conover had been involved with George Wein's project from the beginning, serving on the festival's board of directors and acting as a host. There was no recognition of the man who had organized more than three-dozen jazz events at the White House for every president from Kennedy forward. Conover's Voice of America program, the Music USA Jazz Hour ran for over four decades, and reached, at its peak, thirty million listeners behind the Iron Curtain and one-hundred-million worldwide. It did not—by Congressional decree—reach Americans. Jazz writer Gene Lees said, "Willis Conover did more to crumble the Berlin wall and bring about the collapse of the Soviet empire than all the Cold War presidents put together." Away from the microphone, he was an aging, nameless face, neither recognized or remembered by most attendees. Conover was described this way in a New York Times obituary: "He was known as the most famous American that virtually no American had ever heard of." (May 19, 1996). When the White House event concluded, Conover made his way back to the Voice of America studio, a few blocks away on Independence Avenue, and went back to work on that night's Jazz Hour. What Conover accomplished in a lifetime at the Jazz Hour is impossible to quantify; hyperbole and bona fide achievement are both parts of his legacy. His life was no less complicated than his work.

The Voice of America

To understand the anonymity of Conover, in his own country, it is necessary to recognize the clandestine operations of the Voice of America. When the stars aligned, the VOA was embraced in a bipartisan manner. When there was any question of the organization's effectiveness, Washington bureaucrats treated it as a political football, both sides of the aisle lining up to kick it as far from themselves as possible. In 1939, the United States was the only world power without a government-subsidized radio service, with some degree of global reach. It was that year when Germany invaded Poland setting World War II in motion; the Nazi regime already having a large network of radio transmitters broadcasting into other parts of Europe and into Latin America. Japan, now at war with China, had a similar propaganda apparatus in place while the Dutch, English, French, and Soviets had been broadcasting radio propaganda since the beginning of the decade, the USSR, in fifty languages. Legislation for a national radio service had been introduced—and failed to pass in Congress—in 1937, 1938 and 1939 despite the concerns of many elected officials that saw the need to counter Nazi propaganda. President Franklin D. Roosevelt established the U.S. Foreign Information Service (FIS) broadcasting from New York City and bringing in seasoned journalists and producers. But the lack of a supporting government infrastructure was near crippling. Shortwave radio was the means of broadcasting for all the industrialized countries with propaganda programming and those countries developed government-run networks to disseminate programs. FIS had to rely on U.S.-based amateur radio operators. Shortwave radio kits were inexpensive and relatively easy to build and by the early 1920s, there were sufficient numbers in use to warrant licensing regulations. By 1924, amateur operators in the U.S. were broadcasting as far away as New Zealand. FIS recruited both amateurs and professionals in the U.S. and worked with BBC officials in London to bring about off-shore programming, including Voice of America broadcasts that began concurrently with the 1941 U.S. entry into the war.

The numerous government agencies under whose umbrellas the VOA resided, prohibited the programs from being broadcast inside the U.S. either live or on tape and critics of the VOA questioned what "truths" were being broadcast on the taxpayer's dollar. Government officials offered what seems a self-defeating explanation, saying "programming used to promote American interests abroad could amount to domestic propaganda if shown within the United States." The ban on U.S. broadcasts remained in effect for over seventy years, being lifted in 2013 when the internet had made such injunctions useless.

The VOA, in 1953, came under the scrutiny of the infamous Senator Joseph McCarthy. McCarthyism found targets everywhere, many singled out for support of reforms such as child labor laws, women's rights and vaccines—all seen as communist apparatuses. Because the entertainment industry was seen as a sector particularly "soft" on communism, the VOA became an extension of those suspicions. Among the accused communist sympathizers in the music world were Alan Lomax, Paul Robeson, Leonard Bernstein, Pete Seeger, Aaron Copland, Harry Belafonte, Lena Horne, clarinetist Artie Shaw, and pianist Hazel Scott, all of whom were blacklisted. Terence Ripmaster writes in Willis Conover: Broadcasting Jazz to the World (iUniverse, 2007) that McCarthy—among his multiple VOA accusations, identified Raymond Kaplan, an engineer at the network. Kaplan was notified that he may be called to testify for his part in the VOA plan to build a transmitter near Seattle. The McCarthy committee was suspicious there was a nefarious reason behind the Pacific Northwest location, such as its close proximity to Russia. Kaplan wrote to his wife "Once the dogs are set on you, everything you've done since the beginning of time is suspect." He did not wait to be called, throwing himself in front of an oncoming truck in Cambridge, Massachusetts.

In the wake of the McCarthy hearings, the VOA was left devasted. Congress cut their 1954 funding from twenty-two million dollars to sixteen million. Individual VOA programs were rarely the targets of investigation but Ripmaster suggests that the Jazz Hour was irritating to VOA critics because the program's public image was dominated by the likes of Louis Armstrong, Duke Ellington and Count Basie; the subtext being that black musicians didn't represent America. Jazz itself was a sticking point for the program's detractors as Ripmaster explains: "For these critics, jazz conjured up images of smoky clubs, alcohol and drug abuse, and seedy people." Much of the global audience seemed to disagree; jazz was freedom and freedom was American; the two were synonymous.

Conover was born into a military family in Buffalo, N.Y. in 1920 and attended dozens of different schools as the family moved around the country. As a result of an extended correspondence with the science fiction writer H.P. Lovecraft, he became an editor the Science Fantasy Correspondent, a 1937 magazine. At fourteen he was given the part of a radio announcer in a high school play. The resonant baritone he would become known for was developing in 1939, and as a college student in Salisbury, Maryland and took his first paying job as a radio announcer at WSAL. He was later offered a job at WTBO in Cumberland, Maryland, after winning an announcer contest. Conover had shown little interest in music, and none in jazz when he inadvertently came in contact with a recording of Charlie Barnet's "Cherokee"; that encounter shaped his life. Now an active explorer of record store jazz sections, he became a disciple of Ellington who later became a close friend. A stint in the army again found him behind the microphone, due to his extreme nearsightedness. Following his time in the service, Conover landed an announcer position at WWDC, then in downtown Washington, D.C. and hosted the daily broadcast of The Tune Shop. Maristella Feustle's Willis Conover's Washington" (Current Research in Jazz 8, 2016) notes that the Voice of America network knew of Conover years before he went to work there, even rebroadcasting some of his WWDC programs. She cites The Washington Post of September 4, 1949, writing "Willis Conover, WWDC expert on swing and jazz, is...traveling with Duke Ellington's orchestra during the next two weeks, to add to his knowledge of jazz lore." Conover became so inextricably linked to the music he played that otherwise knowledgeable sources leapt to conclusions. One record label initially sought to bill him a bandleader, and Billboard Magazine (December 15, 1951) wrote: "Willis Conover, WWDC, is now fronting a 17-piece modern jazz ork, in addition to his regular radio and TV show." Conover was not a musician, and his associations with jazz musicians came from his contacts as a disc jockey, host/emcee, producer, narrator, and interviewer.

Conover's Jazz Hour was not the first jazz program on VOC but only Leonard Feather's Jazz Club USA (1950-1952) was a moderate success. Feather typically played swing and traditional, but on rare occasions put on a Charlie Parker or Bud Powell recording. For the most part, Feather was adhering to the conservative agenda of the State Department but when Conover entered in 1955, he had other ideas. He insisted on being hired as a contractor, with yearly extensions of his contract, so he could control the content and format of the program. To a great extent, that is what he did for more than forty years. It allowed Conover to expose listeners to hard bop and avant-garde music, often to the irritation of officials. His philosophy was that the music he played should reflect the present state of jazz; its ongoing development and varieties of music. And while Conover never voiced a political opinion in any of his broadcasts, he was well aware of what the music represented to his listeners. In 1958 he told the British magazine, Jazz Forum "Jazz is a classical parallel to our American political and social system. We agree in advance on the laws and customs we abide by, and having reached agreement, we are free to do whatever we wish within those constraints. It's the same with jazz. The musicians agree on a key, the harmonic changes, the tempo and duration of the piece. Within those guidelines, they are free to play what they want." And when people in other countries hear that quality in the music, it stimulates a need for the same freedom in the conduct of their lives."