By JEFF STOCKTON
August 2, 2009
Sign in to view read count 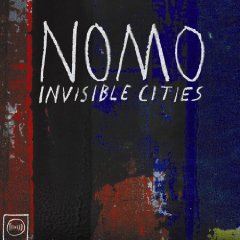 Having started out in clubs around the University of Michigan as an octet (sometimes larger), enchanted by the Afrobeat of Fela (seasoned with a bit of avant jazz), on Ghost Rock (Ubiquity, 2008), NOMO emerged as much more inspired by the clanging junkyard percussion of Congolese Konono No. 1 and German eccentrics such as Can and Kraftwerk than by the work of John Coltrane or Charles Mingus. That was a daring record, simultaneously a natural step in this ambitious collective's evolution and a great leap forward in sonic originality. Invisible Cities serves as a sort of summation, gathering a few tracks that would have fit perfectly on Ghost Rock, a few more easily linked to the band's beginnings and a pair of carefully selected, representative covers.

Invisible Cities visits a lot of territory in its relatively brief 42-minute run time. "Elijah" is a swirling, modal Africa Brass-style freeform overture that precedes "Nocturne," which features NOMO's signature electric kalimba on top of a steady bass line, vocalizing over the drums and a hazy guitar coming out of the shadows. "Waiting" and "Patterns" are classic funk workouts, offering hot soloing and steady rhythmic vamping, while "Crescent" and "Banners on High" turn down the gas and set the mood via soothing flutes and gentle Rhodes keyboards.

The decision to remake Tom Ze's "Ma" comes across as particularly inspired statement of purpose. Ze was at the forefront of Brazil's Tropicalia movement in the late 1960s, but his music quickly became unclassifiable, marked by Afro-Brazilian beats, folk forms, homemade instruments, musical erudition and a general unwillingness to conform. NOMO's cover is faithful to the original, with leader and chief songwriter Elliot Bergman's warm-jet bass clarinet offsetting the sharp plinking of synth noise as the melodic lines of the horn section and dreamy soundscape vocals worm their way into your head.