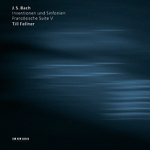 The available recorded music of Johann Sebastian Bach is like sex and pizza: even the worst is still pretty good. This is particularly true of the composer's keyboard music performed on modern piano. Beginning with Glenn Gould in 1955, through recordings by Andras Schiff, Angela Hewitt, and Murray Perahia in the 1980s, '90s, and '00s, Bach finds himself well represented in the marketplace.

This high level of available recordings is hard to match. On the rare occasions when such a fine Bach performance crops up, a new Holy Day of Obligation should be declared. The young Austrian pianist Till Fellner accomplishes such a rare feat with his maddeningly conceived recital on Inventionen und Sinfonien / Französische Suite V.

Fellner's inaugural Bach recording was 2004's songful Das Wohltemperierte Klavier, Buch I, BWV 846-869 (ECM) (The Well-Tempered Clavier). Fellner might have been expected to follow this with the Second Book of Preludes and Fugues, but he did not. A deep and thoughtful pianist, Fellner only records a piece after much study, rumination, and performance. According to Fellner, "I've been playing the Inventions much longer, and I felt the time was ripe to record them. I've been playing Part II of the WTC for a year now, but I don't feel ready yet." This approach has paid off for Fellner with his WTC Book I, a revelation of how Bach expressed his talent for choral composing through the keyboard.

Inventionen und Sinfonien are likewise expressive. Popularly known as the "Two- and Three-Part Inventions," the Inventionen und Sinfonien are a collection of thirty short compositions consisting of fifteen inventions (two-part contrapuntal pieces) and fifteen sinfonias (three-part contrapuntal pieces). These pieces were originally composed as lessons for Bach's keyboard students. The inventions were written while Bach was in residence in Cothen (1717-1723) and sinfonias during Bach's Leipzig period (1723-1750).

Fellner's approach is the most tuneful on record. He makes his playing beautifully transparent, accentuating the elements that reveal Bach's preference for choral composing. Fellner's sound is spacious and well balanced (a credit to Manfred Eicher and his crack engineers). This is Bach at his warmest and most friendly, perfectly presented by Fellner on the modern piano. Like the WTC Book I, Fellner makes the 2- and 3-part inventions sing as if part of a cantata. His lyricism is matched by the sumptuous and muscular tone imparted by the modern piano. The fact that Bach composed these keyboard exercises makes them high art. Fellner's superb playing properly honors Bach's achievement.