By GLENN ASTARITA
September 9, 2016
Sign in to view read count 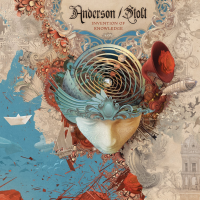 Guitarist Roine Stolt and fellow members of Swedish prog rock masters The Flower Kings, Tom Brislin (keys), Jonas Reingold (bass), Daniel Gildenlöw (backing vocals), Michael Stolt (bass) and Felix Lehrmann (drums) align with one of the founding fathers of the British prog movement Jon Anderson (Yes) for a strikingly arranged rock and electro-orchestral program, fabricated with an artistic flair. Stolt and associates would theoretically assume the roles of the 'newer' post-90s extension of prog's glory days, where bands such as Yes, Gentle Giant, ELP and other notables set the paradigms for future explorations. Of course, Yes and others laid out the frontiers via an influential archetype that evolved over time. Here, Anderson's magical and wistful vocal delivery casts an optimistic state of consciousness by generating a polytonal dimension built on layers of synth strings, multicolored keys, and wistful soundscapes.

The ensemble's broadly textured backdrops and Stolt's resourceful use of electric and acoustic guitars are segmented into four primary topics or thematic vistas underscored by inferences to the album moniker. With forceful rock pulses, memorable choruses and Anderson's lighter-than-a-feather vocals, the musicality of this production rekindles the days of yore, stylized with a modern sheen. Most of these works are engineered with melodic hooks and a horde of subtle nuances and shadings, topped off by a supporting cast of background vocalists.

On "Knowing," Stolt's heartwarming and stately acoustic guitar intro is followed by the integration of sub-themes, pastoral etudes, and lush symphonic treatments that seamlessly integrate into the grand scheme of matters. Hence, "Chase and Harmony" is another composition that offers a beautiful intro, performed on piano by either Brislin or Larrson that segues into a mid-tempo rock groove, adorned with a brief chamber passage and Anderson's harmonious singing.

" Know..." is the lengthiest work at 11:13, commencing with a jazzy vibe and Anderson's airy and up-tempo balladry that surges forward with several alterations of the primary storyline and Stolt's stinging, but concise leads. Without a doubt, this album is most assuredly one of Anderson's finest side projects to date, and perhaps one of his best outings since the glory days of Yes. Moreover, Stolt is a Renaissance man who helps shape these magnetic arrangements with a holistic slant, rounding out a top-flight group that envelopes the proceedings into an eventful sojourn that should gracefully endure the sands of time.