By JACK BOWERS
January 5, 2015
Sign in to view read count 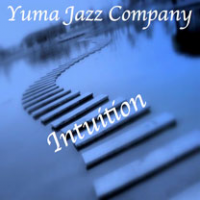 Intuition is the fourth album by the Yuma Jazz Company, a well-groomed post-bop quintet that has been gigging in southwestern Arizona since it was formed around a dozen years ago. As one would expect from a group whose home base lies a few miles from the Mexican border, the Latin influence is strong, especially on "Late Night Taco Stand," "Cozy Samba" and "(She Is) Everything Plus," all of which were written and arranged by trumpeter Steven Hennig.

For more straight-ahead fare, there is guitarist Carl Posch's sassy "Shut the Uffle Up" (which leans perilously close, melodically, to Clifford Brown's "Blues Walk"), and for slower-moving and more intimate themes, Hennig's "Well Worn Sole" or "Let's Remain at Large." Posch, by the way, is splendid as the rhythm section's "third leg," trimly laying down the foundation customarily earmarked for piano, and solos adroitly as well. Speaking of soloists, Hennig and tenor Brian Carlson shoulder much of that load, and carry out the task with warmth and assurance. No grandstanding, simply plausible statements that are always pleasing to the ear. Carlson moves from tenor to alto on "At Large" and delivers another persuasive solo, his light, high-register tone vaguely reminiscent of Lou Donaldson or even Paul Desmond.

There is one vocal, by Eloisa Arviso, on Hennig's "Intuition," a pleasant song whose lyric seems more afterthought than essential. Enough said about that. Bassist Jon Knudtson strikes all the right notes, and does so with resonant authority, while drummer Brandon Cruz is energetic and versatile, lending ample percussive color to "Taco Stand," "Cozy Samba" and "Everything Plus," among others. Even though Yuma, AZ, is rather far removed from any of jazz's time-honored hotbeds, it is clearly home to a number of talented musicians. The five who comprise the Yuma Jazz Company should not be written off as neophytes, an appraisal that would do them a disservice. Intuition is a charming mosaic, and so is the Company it keeps.

Late Night Taco Stand; Intuition; Cozy Samba; Well Worn Sole; Shut the Uffle Up; Let’s Remain at Large; (She Is) Everything Plus.