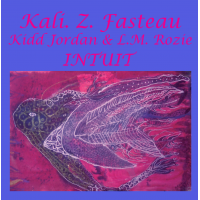 To pigeonhole a musician is to ghettoize a music. But we all do it. Yes, Kali Z. Fasteau is a pianist, but also a drummer, a cellist and a flutist. From her twenty plus recordings she refuses to be fixed with a descriptor. She also performs on the nai, kaval and shakuhachi flutes, is a vocalist, plays viola, violin, mizmar, soprano sax, synthesizers, and sanza. Like a modern Rahsaan Roland Kirk, she just makes music.

Her brand (another pigeonhole) is improvised and free jazz. She has performed with Archie Shepp, Rashied Ali, William Parker, Joseph Jarman, Joe McPhee, Hamid Drake, and Louis Moholo-Moholo, to drop just a few of her heavyweight collaborators.

On Intuit she plays duos, alternating with L. Mixashawn Rozie and Kidd Jordan. Both performed on her previous disc Piano Rapture (Flying Note, 2014). Fasteau limits herself here (limits!) to drums, nai flute, viola, mizmar, vocals, and introduces a new instrument in her arsenal, the aquasonic or waterphone. Which she bows, taps and charms into a metallic hum to accompany Jordan's upper register tenor explorations on "Celestial Trolleycar." Fasteau's one-world music approach to improvisation draws from her residency in Africa singing "Soothe Sayer" to Rozie's West African djembe playing. What is extraordinary is the depth and diversity of the music contained here. Eyes closed and it's easy to picture Albert Ayler performing with Ronald Shannon Jackson when Rozie and Fasteau engage a tenor/drums duo on "Winged Horses." Highlights are her cello/tenor conversation with Jordan on "Lineage," where the pair deftly braid their two instruments into one voice and the flute and flute landscape of "Moonlight Swim" she creates with Rozie.