By KARL ACKERMANN
October 18, 2018
Sign in to view read count 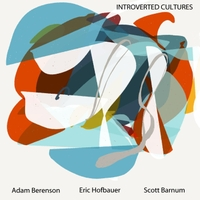 On his 21st album, composer/pianist/electronic artist Adam Berenson continues his string of remarkable and unpredictable projects with Introverted Cultures. His early association with Paul Bley and a broad range of influences and interests have resulted in a harvest of creative music that shapes unexpected hybrids. Here we have a drummer-less trio for the first twelve tracks of this double CD and, in effect, three percussionists for the final eight. The first disc consists of relatively compact Berenson compositions and a second disc of eight free improvisations from the trio. On that second disc Berenson, guitarist Eric Hofbauer and Berenson's long-standing bass partner Scott Barnum utilize percussion devices in addition to their acoustic instruments. The late Daoud Shaw also contributes electronics along with his engineering tasks.

Barnum has performed with Dave Liebman, Tim Hagans, Bill Carrothers and Phil Grenadier, among many other artists. Berenson and Barnum are longtime collaborators who first recorded as an acoustic duo on Journey Through Space (Self Produced, 2007) and, later, on Jnana (Dream Play Records, 2010), a trio outing with percussionist Bill Marconi. Barnum also contributed bass and live electronics to Berenson's Lumen (Dream Play Records, 2015) project. Guitarist Eric Hofbauer was a 2017 Downbeat Rising Star Critics' Poll winner and has been lauded for a cycle of solo guitar recordings released from 2004 through 2012. Like Berenson, he is not confined by genre or style, and has performed blues, jazz, classical, Americana and new music styles. Hofbauer is a very active member of the Boston jazz scene, leading his own quintet and performing/recording with Han Bennink, John Tchicai, Cecil McBee, George Garzone, Steve Swell, Matt Wilson, and a number of other notable artists. He received a Master's degree from the New England Conservatory and teaches at several area institutions.

"The Symbolism of Hands" and "Diathesis" open the first disc with plenty of white space as Berenson and Hofbauer engage in dialogs that make strident points without raising voices. Often lively and pliable, "Disentangled" incorporates stride piano and bebop elements and leads to the more reflective but off-kilter "Bleak Exultation." Elsewhere, in the composed section of the collection, there is the pensive minimalism of "The Reality of the Psyche" and the classical influence that overlays "A Haunting Presence on the Moors." The most overtly melodic piece on the first disc is the closing "Ghost Pillow," where Barnum's bowed bass lends a heightened sensation of melancholy. The fully improvised second set is a slow buildup of instrumentation. The all-percussion "Trail of Tears" begins a formation buildup, with guitar joining on "Treaty of Dancing Rabbit Creek," then switching to bass on "The Lunatic." The pieces all come together with "The Juices of Truth," enhanced by Shaw's more overt electronics. The intriguing "An Earlier Version of You" begins with a slurred bowed bass and concludes with a piano solo that occupies an unidentified space among free jazz and post-bop styles. Berenson's playing maintains a haunting, somewhat foreign beauty throughout the second half of the piece. In sharp contrast, the twelve-minute "Vision Quest" is inside-out experimentalism that manages to sound both minimal and busy at the same time.

The symmetry and empathy within the trio is such that passages of spontaneously improvised music often sound composed. The rich diversity of music here will be no surprise to those familiar with Berenson's Lumen, which includes everything from classical to jazz to the unclassified. On Introverted Cultures, the crossing of genres is less overt but more often incorporated into single pieces. The effect is realized in obscuring the lines between different modes of awareness and exposing potentials of the listening experience that are normally concealed. Introverted Cultures is a vastly rewarding collection.

CD1: The Symbolism of Hands; Diathesis; Disentangled; Bleak Exultation; Edith Mathis; The Reality of the Psyche; A Haunting Presence on the Moors; We Are Ignorant; ...limping...limping...limping...; I Adore You; You Need Not Fear the Icy Noise Within; Ghost Pillow. CD2: Trail of Tears; Treaty of Dancing Rabbit Creek; The Lunatic; The Juices of Truth; The Harvest Feast; An Earlier Version of You; Vision Quest; In My Beginning Is My End.