By DANIEL LEHNER
October 13, 2019
Sign in to view read count 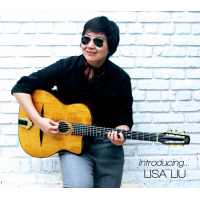 lisa liu's Introducing..." is a great example of one of the subtly exciting things about "vintage" styles: that, no matter how observant, studious and sometimes even intentionally conservative the endeavor can be, human nature ends up evolving them anyway. Liu's general genre is called many things—trad jazz, gypsy jazz, et. al.—but the album is not merely a meticulous recreation of a period, but a capably produced amalgam of different pre-bop styles that she handles both dutifully and skillfully.

The first track alone, a rendition of Django Reinhardt's "Duke and Dukie," shows this off: Liu swoops and dives through the changes in the same way its famous French composer would, but the performance contains also shades of early rock n' roll and folk punk. "September Song," a favorite of jazz guitarists of all stripes, has plenty of windy diminished inventions, but her slow bends of the melody is as indebted to country blues as it is to Barney Kessell. Liu's own "Valse D'elle" is a Bach-meets-French-musette whirlwind with a rousing beer hall bridge, wasting very little of its creative energy on noodling and more on its own compositional strength.

Introducing... has diversity in its cast as well as its styles. Vocalist Cait Jones leads a beautiful and tantalizingly brief rendition of Burwell/Parish's criminally-underrated "Sweet Lorraine," for which Liu is happy to dutifully fade into a supporting role. Violinist Victor Lin matches Liu's power on "Rebound's Bounce," his double stops splintering intervals and adding rich harmony to already extraordinary fiddle lines. On "Buenos Aires," accordionist Loic da Silva ups the harmonic complexity into crunchy, altered chordal territory before skillfully bringing it back down to earth.

At the end of the day, though, it's Liu's show, and the last two tracks make this abundantly clear. She channels a bit of Art Tatum in her bright, maximalist intro to "Out of Nowhere," spinning rubato webs of speedy lines and resting on rich chord alterations, and on her solo rendition of the oft-performed "Someday My Prince Will Come," she merges the two textures together into a rich tapestry of melody and harmony. Lucy Liu's Introducing... ends up being a strong first showing by a guitarist versed in "genre" but not limited to it.