By MARC DAVIS
November 3, 2014
Sign in to view read count 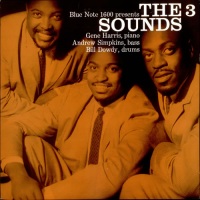 This is the moment I've been looking forward to, and dreading. Three Sounds. A piano trio I've heard of, but never heard. And what I'd heard about them wasn't entirely nice. I was sure I would hate them, but still I was very curious.

The Three Sounds. Here's a band that was intensely popular in the late 1950s and '60s, recorded 16 Blue Note albums in 10 years... and yet they have vanished practically without a trace. Many jazz books don't even mention The Three Sounds, and those that do are not exactly complimentary.

I had read Richard Cook's Blue Note Records: The Biography, and it didn't exactly warm me to the Sounds. Cook wrote that the Sounds played "a kind of hip cocktail music" that was popular among "people who rarely listened to any other kind of jazz." Their music, he wrote, was "light, bluesy, discreetly swinging" with "genteel intensity" and "modest improvisation." In short, Cook concluded, The Three Sounds produced "smart background music."

Not exactly a ringing endorsement. Not the kind of write-up that made me quiver with anticipation.

And yet ... here we are. Listening to Introducing the Three Sounds and thinking, "This is either going to be awful or a very big surprise."

The album starts with exactly the kind of kitschy lounge jazz that must have raised the hairs on Richard Cook's neck. "Tenderly" is corny and cutesy and about the worst possible introduction to The Three Sounds. Until pianist Gene Harris goes into his solo, and suddenly it's bluesy and wonderful. Wait—could The Three Sounds be both dreadful and a revelation at the same time?

From this awful/wonderful start, the album gets better. The jazz standard "Willow Weep for Me" is exactly what you expect—bluesy and swinging. "Nice and Easy" is, as the title says, a casual, almost Brubeck-ish tune. And then—wham!—"Blue Bells," a song with Harris playing the dreaded celeste in the right hand and piano in the left hand. The celeste, as always, sounds like a toy piano, undercutting what would otherwise be a nice blues.

It goes on and on like this. A fantastic version of Dizzy Gillespie's "Woody 'N You," but with a pointless, not-terribly-impressive drum solo. A corny version of "O Sole Mio," with a jumping blues piano solo. A dull take on "It Might as Well Be Spring," with a dull bass solo, and then an upbeat and swinging version of Duke Ellington's "Don't Get Around Much Anymore."

I'm still confused, and still curious. I want to hear the Sounds play with Nat Adderley, Johnny Griffin, Stanley Turrentine and others. I'm still intrigued, and that can only be a good thing.