By HRAYR ATTARIAN
December 13, 2012
Sign in to view read count 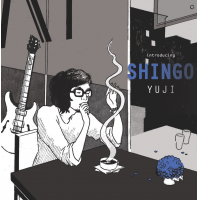 Japanese-born guitarist/composer/shakuhachi player Shingo Yuji has made his home in Los Angeles. On Introducing Shingo Yuji, he draws deeply on his native, rich musical heritage as well as jazz and pop worlds to create an engaging mélange.

Yuji's father, an amateur guitarist, introduced him to music at the tender age of nine. From then on Yuji grew to become a semi autodidact. Although he names bassist Jaco Pastorius and guitarist Pat Metheny as influences, his style on bassist Charles Mingus' late-period hard-bop cooker, co-written with singer/songwriter Joni Mitchell, "The Dry Cleaner From Des Moines," is close in feel to guitarist Kenny Burrell . His intricately constructed, strummed solo over bassist Dave Robaire and drummer Dan Schnelle's rhythmic support maintains the intelligent whimsy of the original.

Yuji's balladeer side comes through on his own "A Song for the One," his sparkling effervescence and harp-like strings remaining mordant in their statements. Schnell's gentle cymbals and Robaire's deep, serenading bass add romance to the nostalgic ambience.

On the unaccompanied, freely improvised "Improvisation And Variations Of Itsuki Lullaby," Yuji's spontaneous creativity is on full display, as he weaves meandering, melodic lines around Zen harmonies.

This charming and smart record closes with the utmost homage to his native culture. "Rashomon," titled after the most iconic examples of Japanese cinema, filters the essence of unconventional storytelling through angular, jazz sensibilities. The collective extemporization creates a theatrical atmosphere inspired by the subject matter.

With a rare combination of wisdom and vision that bellies his youth, Yuji has recorded an innovative disc that whets the appetite for what is yet to come from this cross-cultural fusionist.

Laputa; Shadows On The Sun; The Dry Cleaner From Des Moines; A Song For The One; Improvisation And Variations On Itsuki Lullaby (Traditional); Ame (Rain) - Interlude; Help; Rashomon.