By JAKOB BAEKGAARD
April 9, 2019
Sign in to view read count

While Julian "Cannonball" Adderley and Etta Jones have not received the same critical attention, they are both artists that deserve a place in the history of jazz. They also have a lot in common. Both are earthy and soulful musicians, who communicated directly with the audience.

As the driving force behind the Cellar Live label, saxophonist Cory Weeds has been busy doing his share to promote contemporary jazz, so it comes as a pleasant surprise that he has found the time to start the archive label Reel to Real. Unlike reissues that are sometimes lost treasures that are found again, an archive release is a found treasure that has never been heard before.

Weeds has found the perfect partner in producer Zev Feldman and his team, who have helped him release two packages of previously unheard music that live up to the high standard set by Feldman's other association, the renowned Resonance label. One is by the established saxophone hero, Cannonball Adderley, and the other one, perhaps the most exciting release, is by the underappreciated singer Etta Jones.

Cannonball Adderley
Swingin' in Seattle: Live at the Penthouse 1966-1967
Reel to Real Records
2019

The work of the superbly swinging saxophonist Julian "Cannonball" Adderley has been extensively documented and as a vital part of one of the great jazz records in history, Miles Davis' Kind of Blue (Columbia, 1959), and with the classic Somethin' Else (Blue Note, 1958), one of his highlights as a leader, his name has been written into the history of jazz.

The question is if Swingin' in Seattle: Live at the Penthouse 1966-1967 adds anything new to the picture of Adderley? First of all, the live recordings collected on the album are top-shelf Adderley, but they also capture him in an important period during his commercial peak while he was recording for Capitol Records. However, Cannonball was not selling out in any way. The spirit of jazz is strongly felt from the vibrant opener, "Big P," announced as a regular tune in the band repertoire, to the playful piano lyricism and smoky muted trumpet on "The Girl Next Door," courtesy of a young Joe Zawinul and Cannonball's brother, Nat Adderley.

The swinging beat is provided by drummer Roy McCurdy and bassist Victor Gaskin, and they never lose steam as the band stretches out in ten-minute plus epics, far from the limitations set by a regular record. Adding further atmosphere are the raps from Cannonball Adderley, just as natural, hip and joyful as the music itself. This is music that invites the audience into active participation and there's a spirit of gospel, handclaps and rolling rhythm on "Sticks" and as Cannonball points out: "it's a good tune." In fact, the whole album brims with good tunes and covers different moods, including the poignant ballad "Somewhere." 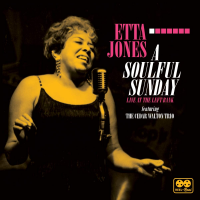 Unlike Julian "Cannonball" Adderley, who has become a household name in jazz, Etta Jones is a less familiar artist. Not to be confused with the blues singer Etta James, Jones was a distinctive singer whose inspiration included Billie Holiday, Thelma Carpenter and Dinah Washington. She was born on November 25, 1928 in Aiken, South Carolina and died in New York on October 16, 2001. She had already played in the Earl Hines Orchestra when she got her breakthrough with the song "Don't Go to Strangers." It was Prestige Records that recognized her potential and she recorded six LPs for the label. Later, she recorded for Muse and High Note and formed a fruitful musical relationship with saxophonist Houston Person. Their relationship was compared to Billie Holiday and Lester Young and Person remains one of Jones' advocates.

A Soulful Sunday: Live at the Left Bank, recorded on February 27, 1972, catches Jones at a time when the hype of "Don't Go to Strangers" had disappeared and she was simply trying to make a living out of music. As she said: "All I want to do is work, make a decent salary, and sing."

Indeed, she could sing. Writer James Gavin describes her voice in the following way:

"Her sound had an acerbic nasality; she stretched out notes until they threatened to snap. Yet Jones loved to sing about romance, preferably the doomed kind. 'if a song is sad it's just beautiful to me,' she explained."

Jones' voice is the highlight in a perfect, intimate setting with the trio of pianist Cedar Walton, bassist Sam Jones and drummer Billy Higgins. They let the fire burn on the instrumental opener, "Theme From Love Story" with high energy and quick, tingling runs from Walton, but when Jones enters the scene, she is the primary storyteller and Walton's playing becomes more sparse and spacious, but still with surprises and musical ornaments. However, the blues feeling prevails. This is underlined in the take on "This Boy's In Love With You," written by Burt Bacharach and Hal David, here billed as "This Girl's In Love With You." While Aretha Franklin keeps the orchestral touch in her version, the song is completely transformed by Jones in a bareboned blues version that belies its origin, but the point is that it comes across as truthful and not as a gimmick. Jones sang songs the way she felt them, and the song is deeply felt. The sophistication comes across in the way Jones' voice and Walton's piano lines play with each other and Walton is also given extra space in a glistening solo.

Both Swingin' in Seattle: Live at the Penthouse 1966-1967 and A Soulful Sunday: Live at the Left Bank are musical gems worth discovering and the extensive booklets with interviews and essays add valuable context that tells of the time and circumstances of these recordings. Especially in the case of Etta Jones, James Gavin's biographical essay gives vital information that is not so easy to find.

While Julian "Cannonball" Adderley and Etta Jones have not received the same critical attention, they are both artists that deserve a place in the history of jazz. They also have a lot in common. Both are earthy and soulful musicians, who communicated directly with the audience. Reel to Real has done an admirable job in bringing these treasures to the public.

A Soulful Sunday: Live at the Left Bank

Tracks: Theme From Love Story; Vernon Welsh Intro; Sunday; This Girl's In Love With You; If You Could See Me Now; For All We Know; Exactly Like You; You Better Go Now; Blow Top Blues; Love Nest; Don't Go To Strangers.