By BRUCE LINDSAY
January 30, 2014
Sign in to view read count 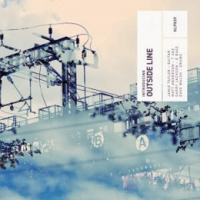 The glory days of Leeds United may be long gone, but while its football team has seen better times, the Yorkshire city's music scene has gone from strength to strength. The individualist stance taken by musicians such as Matthew Bourne hasn't always pleased the jazz police, but it's given Leeds a reputation as a vibrant and always interesting musical community. Guitarist Jamie Taylor has been a part of that community for some time. A lecturer at the esteemed Leeds College Of Music, Taylor's former students include members of Led Bib and Roller Trio. Introducing Outside Line establishes Taylor's own quartet's place in the scene.

Taylor formed Outside Line in 2012, in the company of colleagues Garry Jackson on bass and Dave Walsh on drums, and graduate Matt Anderson on tenor sax. Introducing Outside Line is an album of two distinct halves—the "Someone New Suite" and the "Three Colours: Blues Suite," both composed by Taylor. Each of the suites is around 20 minutes in length, is formed of three separate tunes and features the same quartet of musicians, but that's where the similarity ends.

The "Someone New Suite" is the exploratory work, where the band takes its inspiration from Paul Motian, Keith Jarrett and, it would seem, a host of others. "Someone New" moves from its meandering, dreamlike, opening into a mid-section where Taylor's open tone and fluid phrasing carries echoes of George Benson. The brief but pretty "Fugue (Hazy)" mixes the classical form with the influence of late-60s/early-70s prog—Taylor's solo introduction sharing a kinship with Steve Hackett's early work with Genesis. "The Optimist" is another pretty composition. The tune may not be too memorable in itself, but it does feature more of Taylor's lovely prog-influenced guitar as well as extended solos from the guitarist and from Anderson.

"Three Colours: Blues Suite" is an altogether more upbeat and swinging affair. Jackson and Walsh in particular appear to relish the change of pace and mood, locking together to generate some exciting rhythms. "Canon For Cannon" really swings—a tune that Wes Montgomery could well have enjoyed playing. "Always Rising" zips along at a fast pace, a bop-ish number that features impressive unison playing from Taylor and Anderson. Anderson adds another fine solo—crisp intonation and an economy of style leave space to savour each note. "Dig Doug" is the bluesiest part of the Blues Suite. Jackson's opening solo sets up the mood—funky, raw, slinky—his fellow players respond swiftly, building the album's most immediately enjoyable tune.

In its 2014 guide, Yorkshire was placed third by Lonely Planet in its list of the best places to visit in the entire world. Such a revelation hardly came as a surprise to those that live there. It's not just the sunshine and cloudless skies that make the county so great—as Outside Line shows on this impressive debut, the music's pretty wonderful too.