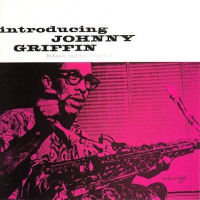 In jazz and rock—heck, even in classical music—there is a sacred throne for those who play fast. Dizzy Gillespie and Oscar Peterson occupy such thrones. So do Jimmy Page and Eddie Van Halen. Fast is fun.

The evidence is here in Griffin's very first album, Introducing Johnny Griffin. It's a 1956 date with a quartet that includes Wynton Kelly on piano, Curly Russell on bass and Max Roach on drums. For 70 years, Griffin was a jazz giant, and this album, his first as a leader, is among his very best.

Griffin could play the hell out of a ballad. His sound is soulful and full-bodied. Two numbers in particular—"These Foolish Things" and "Lover Man" (yes, the same "Lover Man" that Billie Holiday immortalized a few years earlier)—show off Griffin's beautiful tone.

But it's speed you're looking for, and you've come to the right place. The very first number, a Griffin original called "Mil Dew," is blazingly fast. So is "Cherokee," the album's closer, but you expect that on "Cherokee." You don't expect it on Jerome Kern's "The Way You Look Tonight," which may be the fastest take of that song ever recorded. And you don't expect a blazing solo on Cole Porter's "It's Alright With Me," but Griffin delivers.

He is fast, absolutely, but also crystal clear, and clever. He is a bebopper (or hard bopper?) of the first order.

Johnny Griffin would go on to create many great albums. Arguably his best—"A Blowin' Session" with fellow tenors John Coltrane and Hank Mobley—came just one year later. But it's clear from the very beginning, from this album, that Johnny Griffin was destined for a legendary career. It starts here.