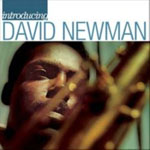 Despite a poverty of packaging which suggests the sort of shoddy compilations sold on gas station forecourts—no personnel or other session details, no profile of the artist—Introducing David Newman proves to be an enjoyable twelve-track trawl through albums recorded by saxophonist/flautist David "Fathead" Newman for Atlantic, Warner Bros, Reprise and Elektra from 1959-77 (most of them available today on the Collectables reissue label).

A member of pianist/vocalist Ray Charles' band from 1954-64, first on baritone saxophone, then as featured tenor player, Texas-born Newman straddled the porous boundary between hard bop and R&B in the 1960s alongside fellow saxophonist King Curtis, though with a more equal balance between the two styles. An expansive, hard swinging soloist and a prolific composer, Newman may not have taken the listener anywhere he hadn't been before, but he always offered an enjoyable ride.

Newman's own-name debut was Fathead: Ray Charles Presents David Newman (Atlantic, 1959) and the title track from that album opens this compilation, which then progresses more or less chronologically through to 1977. All but two tracks, Lennon & McCartney's "Yesterday" and Claude Johnson's "Pharoah's Gold," are Newman originals.

"Fathead" is raucous, vigorous, blues-drenched hard bop, with engaging solos from Newman (on tenor), trumpeter Marcus Belgrave, baritone saxophonist Bennie Crawford (as Hank Crawford was then billed) and Charles. The next three tracks find Newman leading a quartet, on alto and flute, and include the excellent "Congo Chant" and "Night Of Nisan," from Straight-ahead (Atlantic, 1961), made with pianist Wynton Kelly, bassist Paul Chambers and drummer Charlie Persip. Kelly is ideally suited to Newman's bluesy, chicken shack style, and solos with verve on both tracks.

Three tracks from the 1970s—"The Clincher," "Missy" and "Pharoah's Gold"—present Newman fronting electric line-ups. "Missy" is classic rare groove, exuberant funk-infused jazz from 1973, played by a band including organist Dr John, trumpeter Ernie Royal and guitarist Cornell Dupree. Newman tears it up on tenor, though he's at his most honking and screaming on "The Clincher," from 1971.

Newman is still turning it out today, aged 75, with Diamondhead (High Note, 2008) featuring a line-up including pianist Cedar Walton and trombonist Curtis Fuller. He deserves more respectful treatment than he's got from the compilers of this otherwise welcome album.