Boston's local jazz scene draws from a fertile ground of musicians attending the Berklee College of Music and New England Conservatory. Within the city's various clubs, it's possible to frequently catch young musicians while they're still establishing their careers. One such musician presently on the Boston scene is Israeli guitarist Assaf Kehati.

Kehati's first instructor was his grandmother, who was also a professional pianist. At age ten, Kehati began studying guitar and piano. Later on, he added classical violin to the mix. In Israel, Kehati was exposed to the diverse and dynamic sounds of the Mediterranean region, and eventually developed a passion for jazz.

"I really believe that music is something between people," Kehati explained. "It's part of society; it's part of relationships. I like it when everybody is [musically] engaged."

Kehati attended Israel's Rimon School of Jazz and Contemporary Music. Performances during this time included the Israel National Festival, the Machtesh Ramon Jazz Festival, and the Tel Aviv Jazz Festival. In 2007, Kehati moved to Boston, where he continued his studies at New England Conservatory.

At NEC, Kehati worked with drummer Billy Hart, a prominent faculty member who also performs in one of Kehati's projects. "I play my music with other musicians," Kehati reflected, "but [Hart] does something different from any other drummer. He's like one of the melodic instruments, not just drums, he's like a piano. He plays with groove and drive—it's very powerful."

In February 2010, Kehati gave his debut performance at the Regattabar, one of Boston's premiere jazz establishments. The set was comprised of seven pieces, four of which have not yet been released, the others from his debut, A View From My Window (AKJazz, 2010).

Joining Hart and Kehati, were bassist Noam Wiesenberg and saxophonist Eli Degibri, who also plays with drummer Al Foster. Kehati set a relaxed, informal atmosphere sporting socks, khaki pants, and a blue shirt, but no shoes. He sat comfortably, developing phrasings from a hollow body guitar. With a smooth fluidity, Hart provided cymbal embellishments and the band gave way to a lively rendition of Erroll Garner's "Long Ago and Far Away."

"Israeli music has lots of influences. Many styles influence the sound. When I compose, I'm not trying to follow anything specifically. All the compositions I write combine my influences, and after I play, I go back and transcribe."

The second song from the performance, "The Most Beautiful Flower That Ever Grew In My Garden," was a befitting example, reflective of Kehati's varied influences. A tense, passionate piece, it began with a haunting melody, built on a minor vamp. Throughout the composition, the basic 7/4 meter experienced numerous rhythmic changes, against which Kehati altered his playing style. 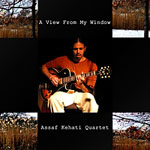 "A lot of times, when I play chords I use my fingers. I feel it gives me more control [of the sound], like I can get more out of the notes. Sometimes I use a pick because it gives more attack. It feels natural to change between the two [approaches]."

Naturally, the music utilizes improvisation. Describing the improvisational interactions with his band mates, Kehati stated: "I provide something kind of simple. I want them to play, not read. They interpret the melody with their own feelings. Sometimes they change things during the performance, which I really like. I like them to play their own way."

Another composition, "Don't Attack," began as a slow-moving ballad, using two triads to build a scale. "I like using triads because they are simple, but have strong sound," Kehati explained. "After the main melody, this piece has no time signature on the chart. The band feels the rhythm and the pace." As the music builds, Degibri contrasted the sound using major scales, while Kehati replied with an augmented fifth, producing darker tones.

Kehati is a passionate artist whose music draws from diverse influences and relies on collective improvisation. He has surrounded himself with like-minded musicians and can be heard in the Boston area at The Beehive and The Fireplace. In June, Kehati will perform in Washington D.C. Later in 2010, he plans to release his second CD, Flowers and Other Stories.

Assaf Kehati Quartet, A View From My Window (AKJazz, 2010)