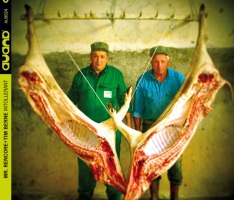 Mr. Rencore was formed in 2006 by baritone guitarist Gabrio Baldacci and drummer Daniele Paoletti, who had been playing together for 15 years in other bands. Three years later, they added baritone saxophonist Beppe Scardino.

All three musicians are at ease in several genres, with careers that have traversed rock, folk jazz and free improvisation, making them comfortable bedfellows. Adding chameleon-like alto saxophonist Tim Berne—who came in specially for this project—the music on Intollerant is a salivating blend of form and texture that dips into a host of styles to come up with portraits that electrify the imagination .

Baldacci composed five tracks, while "Kepas J" and "Bren Corner" are collective improvisations, which show how the band members interweave ideas and work in empathic understanding through a rich collage of styles.

The approach to "Kepas J" is pensive, with fragments from Scardino's bass clarinet floating into the effects from Baldacci as Paoletti adds a skewered beat. All of this is held together by Berne, his alto saxophone weaving a melody through the disparate strands. Berne fathoms the ambit perfectly without suffocating it. This leaves room for the band members to pursue logical tangents that take the form of scalding notes from the baritone guitar and an escarpment of rhythmic cascades from the drums until they all come together and rock out.

"Bren Corner" is more open-ended. Time and space are molded into myriad shapes and sounds. A conversation between Baldacci and Scardino begins in the throes of guitar chords and strangulated clarinet before it gets laid back. The texture turns dense, but no one hogs the limelight; there is room for ideas to float in and out, for ruminations to be folded into the tapestry and for oblique references to be made part of the whole.

The fierce, driving "Mr. Rencore" is a vivid document of the art of marrying composition to free idiom. The horns lock front and center, essaying a volatility that reverberates right through. Melody is rife when Scardino plays the bass clarinet before he goes on a bend while Berne is more modulated. The free movements calibrate their sense of adventure in a constant forging of abstractions and their dissemination. It's wonderfully representative of the approach of the band.

Mr. Rencore, with Tim Berne, in tow is a revelation, showcasing as it does an array of pulsating moods and structure.