Nicholas Payton: Into The Blue 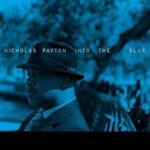 This is a strange mixture of an album. It includes passages of extraordinary and singular beauty and others of noodling anonymity. Practically all of the interest lies in trumpeter Nicholas Payton's performances; most of the blandness comes from his band. The two best tracks, "Drucilla" and "Chinatown," are so exquisitely gorgeous that they almost make up for the grey stuff. But they're outnumbered and it's a tough battle.

The approximate dividing line is keyboard player Kevin Hays. Along with bassist Vicente Archer and percussionist Daniel Sadownick, Hays was a member of the larger group featured on Payton's previous album, the retro-fusion Sonic Trance (Warners, 2003). When Hays is on acoustic piano here, he brings something compelling to the party; when he's on Fender Rhodes, as he mostly is, he sticks to funk-lite vamps and ostinatos, and drifts his way through an overabundance of solo time as though on autopilot. He does this so unvaryingly that one can only imagine Payton approved.

The slow, lonesome "Drucilla," the opening track, raises expectations heavenwards. It's in four distinct sub-sections. The first, Payton's theme statement and embellishment, is of almost unbearable poignancy; the second, where the bass and drums get busier behind Hays' muscular solo, is more assertive; the final two sections, accompanying Payton's extended solo, each raise the temperature further. Payton's improvisation, which begins in reflective, sorrowful mode, concludes with passion, fire and optimism. The mourner transforms into a celebrant, and your spirits rise alongside him.

"Chinatown" and "The Crimson Touch," the first a bittersweet ballad, the second a skittish, off-center, mid tempo swinger, are the other two acoustic tracks, and almost as memorable.

On the other tracks, Hays and the band only really get out of their comfort zone on "Nida." An Eastern-tinged, upbeat jam revisiting trumpeter Donald Byrd's and pianist Herbie Hancock's jazz-funk templates of the 1970s, it features Hays' most engaging electric solo, and an expansive, solid improvisation from Payton over a conventionally swinging middle section. Too often, on the remaining tracks, Payton's solo flights seem entirely independent of the musicians behind him.

If Payton was to focus on the qualities which make "Drucilla," "Chinatown" and "The Crimson Touch" the creative triumphs that they are, we would have an album of truly majestic stature. He's demonstrably got it in him. Maybe next time.