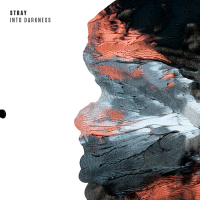 Two old masters and two younger pretenders unite to produce Into Darkness. Saxophonist John Butcher and guitarist John Russell were both part of the so-called second generation of improvisers, following in the wake of progenitors such as Evan Parker, Derek Bailey and John Stevens. Joining them in a continuous 51-minute live performance from London's Iklektic in December 2015 are bassist Dominic Lash and Norwegian drummer Ståle Liavik Solberg. In coming together under the moniker Stray, they decisively upend some stereotypical preconceptions about British free practice.

While the conversational "this-follows-and-answers-that" style of improv remains represented, particularly at the start of "I" and early on in "III," it is subverted by passages which revel in the density of the event. Much of that stems from Russell's wielding of electric rather than his customary acoustic guitar, as his use of FX-pedals ramps up his shimmers, whines and growls into the sort of excess more associated with downtown favorites such as Brandon Seabrook and Ava Mendoza. The others are not in any way cowed by the voltage and prove well able to thread their own forceful assertions into an invigorating whole. Butcher's astonishingly exact use of multiphonics often edges into electronic sonorities—even when he isn't using mics to manipulate feedback—blending pleasingly with Russell's amp-driven howls. At times it's hard to place the different sound sources, conjuring a slightly mysterious and distancing feel on disc which wouldn't have been apparent in concert.

Recognizable timbres, textures and personalities suddenly emerge from the vortex, like figures looming out of the fog. One successful gambit which recurs in "I" and "II" features Butcher holding forth against Russell's skronk, while Lash's throbbing, sinewy abrasions and Solberg's off-kilter clank create a lurching undertow. But such episodes don't signify a default climax, as the receptive interplay leads into other areas replete with collective pauses, as if taking the opportunity to both appraise and plot. One such moment arrives towards the end of "III" when Butcher's percolating circular-breathed whistle melds with Russell's evocation of a Saharan sandstorm, before leaving a wheezy panting punctuated with spacious plucks, taps and rattles until silence prevails.