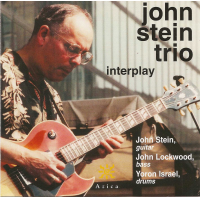 On his fifth album as a leader, John Stein eschews original compositions for standards, except for one tune ("Eleanor's Folly"). Picking up some great tunes could be a good idea in itself. But there is ambivalence in his approach. Stein can go out and inject a measure of intensity, or he can keep the cool in and stay laid back, whence he caresses the tunes instead injecting a nice lustful shot and getting them up and riveting.

Stein has an open, clean tone and he has some nifty chord changes at his fingertips. He has a sense for swing, and when he ventures into that area, as he does on "Bluesette," the song sparkles. Making it all the more accomplished is bassist John Lockwood, whose solo brings in a pliant sinew that extends the dimension. Another fine outing spins on yet another swinger, the delightful "Weaver of Dreams." Stein is in great shape, bringing in textures and insights that make this one happy excursion. Yoron Israel adds some welcome splashes of colour on the brushes and the crash cymbals on the Latin-tinged "Estaté." Stein instills pastel images and then cuts deeper to fill the tune with richer tints.

There is a lyricism on the other tunes, but it is cool. Without the fire, these players tend to pall over the course of the time they take to make their statement and leave interest rather limp.

Visit John Stein on the web.