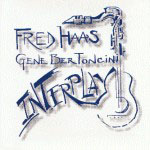 Saxophonist Fred Haas and guitarist Gene Bertoncini have recorded a high wire act of a duet CD entitled Interplay. This is intimate music that leaves these two players out front with only their own resources and each other to depend on. They succeed, wonderfully.

It is a musical lesson to listen to Bertoncini play behind Haas’s solos. The variety of his approaches is a good start on a history of jazz guitar accompaniment. In addition, Bertoncini’s crystalline classical touch is a striking foil for the tenor, especially when intertwining with Haas’s impressive solos on “Embraceable You” and “Broadway.” Fred Haas is a much underrated saxophonist with a deft command of phrasing and solo conception. He is a thoughtful player whose bluesy/swing sound has gracefully absorbed a wide range of influences into the modern era.

The dialog between these two musicians is a reminder that Bertoncini has previously excelled in a duet context. Anyone who has heard his duets with the bassist Michael Moore will not be surprised by his performance on this disc. Haas has also previously recorded in a duet context on a fine disc with pianist Bob Hallahan. In short, Interplay pairs one of the best jazz guitarists of our time with a very talented saxophonist resulting in a highly recommended CD. Haas and Bertoncini, perhaps these two musicians will record together again.

Tangerine; Like Someone In Love; Samantha’s Blues; Estate; I Can’t Give You Anything But Love; Embraceable You; Once I Loved; Broadway; Autumn.