Home » Articles » Jazz and the Net

By BRET PRIMACK
April 20, 2005
Sign in to view read count
That pretty sounds cool, right? It certainly has to be better than regular television. During the fifth season of the Sopranos, I had digital cable, access to hundreds of channels, and most of time, nothing of interest. I don't like sports or shopping so that immediately cuts out a lot of channels. And in Arizona, where there are few African Americans, the local PBS station airs old Lawrence Welk programs every Saturday night. 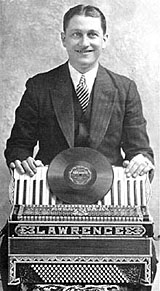 What do I like that I can't find? Jazz. It's largely absent from existing television. Oh yes, there's that gloried public access channel, BET on Jazz. But nobody watches that. And I mean nobody. It's on so few cable systems it's nonexistent.

We can thank Viacom for that, who owns the BET networks. Media companies like Viacom, Clear Channel, Disney, Vivendi, EMI, etc., they just about own the entertainment business, don't they? Not for long.

These companies are dinosaurs in waiting. And they know it. That's why they're engaged in a legal battle over content. A battle they can't win. After the shakeout, there will probably be only one or two major content providers left. Then finally one, Walmart like company. But not all the content will come from China.

And then, when this new day dawns, as it already has, billions of others channels.

That's because the Internet is transforming itself, from being primarily an information medium to a content distribution vehicle. It's filesharing that fired up this revolution. When Napster took off, that's when people started to share digital content. Overnight, ten of millions of people were doing. And are still doing it.

P2P networks, those damned and much feared sources of content have become the inspiration for the next incarnation of the Net.

I shot a video of the web to document its 1995 incarnation, around the time I started producing content and sites. The web was primitive but fascinating, even its largely text based state. You got on the web to get information. The possibilities were so endless that the dot.com thing took off like a rocket.

For the past decade, its been websites, websites and websites. There are literally hundreds of millions of websites.

Dear Website creators. You better get with the program folks, otherwise your website is going to obsolete very soon. Two words, INTERNET TELEVISION.

(I hate it when people use all caps in email. It's like shouting.)

(Sorry, I'm excited about this.)

A convergence of trends serve as the catalyst for the era of Internet Television. We are soon to witness the birth of thousands of channels of video programming.

The democratization of video production drives this.

With the advent of digital video, low cost hardware and software have enabled the skill and discipline of video production into something that's obtainable on a mass scale. Video has become a potent creative tool that anyone can utilize (skill and discipline do matter), and a new level of sophistication for video production has extended into nearly every business and institution.

Video Distribution is also going through a transformation.

This is, in fact, the latest chapter in the continuing saga of mass media. In the first wave, at the beginning of the 20th century, theatres around the country served as the distribution vehicles for films that appealed to the largest commercial audience, produced by a handful of studios.

And then, after World War II, a handful of broadcast networks followed suit, distributing only programs with the broadest appeal.

Today, with digital cable and satellite, there are hundreds of channels dedicated to a myriad of interests and demographics. Still little Jazz though.

Wait, the good part is coming.

Welcome to the third wave of content distribution, Internet Television, where the physical, geographic and economic restraints of cable and satellite disappear. We're moving, very quickly, from the world of the big guys, the cable operators and their network controlled content, to a new paradigm.

We're shifting to a media landscape that's open and global, where consumers and publishers are empowered in ways we can only begin to comprehend.

The adoption of home wireless networks connecting PCs and TVs.

The growth of portable devices capable of carrying internet based video programming.

As the cost of video production plummets, far more producers than we've ever seen before are being enabled. In this soon to be very real world of Internet teleivison, we'll see as many video channels as there are websites today, in as many and varied areas of interests, including some real Jazz channels. Finally.

With such easy access to video, I suspect nearly all websites will feature video, or just be a front-end for video content distribution. There's a reason for the growing popularity of video on the web. We are a culture of watchers, not readers. As a writer, I hate to say that but it's true. Most people would rather watch a video then read a book.

And although they will be empowered, content publishers will face the same challenge they're trying to surmount today—how to reach their audience. One thing the Net does very very well is network people. There's already a pretty extensive global network for Jazz people.

This website, All About Jazz, is a good example. Nearly half a million different users visited this website last month. Half a million. That's a lot of people.

For today's broadcast and cable networks, a channel that reaches only half a million people would be a failure. The new paradigm suggests a more positive outcome.

A Jazz Internet Channel, offering high quality programming that reaches a half a million people will be very successful, selling transportable digital media, both in streaming and downloadable formats.

It's the combination of the low cost of production of video and music and the global distribution channel, the Internet, that makes this all possible.

Stay tuned. Your choices are going to get a lot more interesting.

All Saxophonists Will Be Shot On Sight

Fantasy Records: An Archive of Many Lifetimes