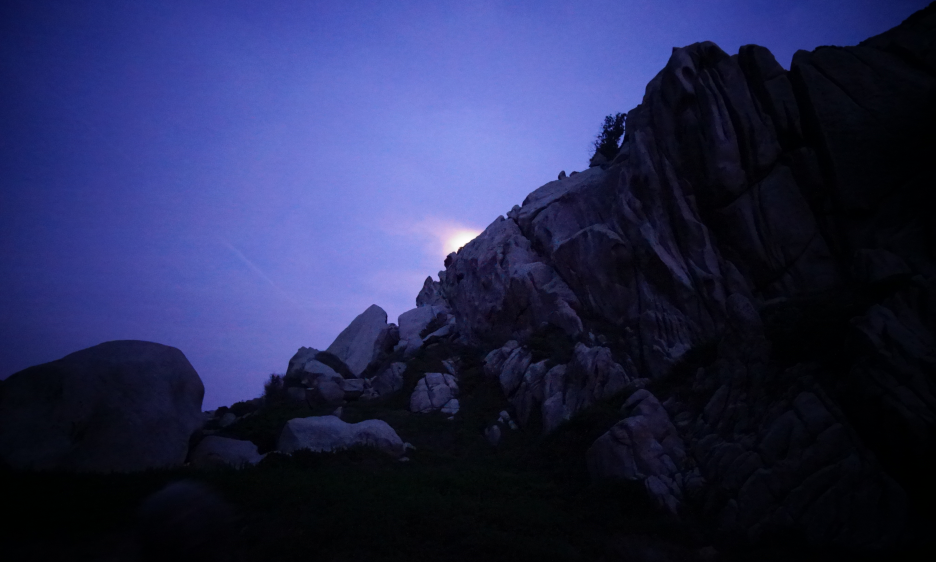 Music gravitates toward special sites and special sites attract suitable music. It is a core value of Musica Sulle Bocche festival in Santa Teresa Gallura, a town at the northernmost tip in the western part of the island Sardinia at the Strait of Bonifacio, Bocche di Bonifacio, with opposite the island Corsica on sight. The island of Sardinia, way out south, situated between Barcelona and Naples, always had its very own characteristics and identity in terms of culture and mentality.

This year's MSB presented 10 concerts during four days at magnificent locations and sites: two beaches, Cala Grande/Valle Della Luna, Spiagga Rena Blanc, a lighthouse at Cape Testa, the country church of the Madonna de Buoncammino (Santuario Campestre Di Buoncampo), and in town on Piazza Santa Lucia and in the Santa Lucia Church. It was an assortment of Bach, Italian and Spanish Pop, Percussion, Mingus strings, Cantu a tenore vocals, action theatre, piano trio jazz, jazz from Alghero with Trilok Gurtu as the prominent guest and the Danilo Pérez Trio with Ben Street and Nate Winn . The official image of this year's edition of the festival by British artist George Underwood "Profile of a Marked Man" (oils on canvas, 2003) has been chosen as an expression of the intertwining of different cultures and musical styles as the festival's seminal spirit.

The festival Musica Sulle Bocche was founded by the musician Enzo Favata from Alghero on the north-western coast and is held in the town of Santa Teresa Gallura at the northernmost tip in the western part of the island situated opposite the island Corsica at the Strait of Bonifacio, Bocche di Bonifacio. It is one of the five Sardinian jazz festivals including Cala Gonone in the inland province Nuoro, Time in Jazz in Berchidda on the western coast, the festival in Sant'Anna Arresi in the south and the two-day festival in Sassari. Sardinia has brought forth a number of strong jazz muscians. Among the best known are bassist Marcelo Melis, pianist/accordeonist Antonello Salis, trumpeter Paolo Fresu, saxophonist Enzo Favata, guitarist Paolo Angeli, guitarist Bebo Ferre and saxophonist/vocalist Gavino Murgia.

Sardinia has a remarkable and lively ancient musical tradition, especially in vocal polyphony, generally known as cantu a tenore and the peculiar old traditions—dating to 2000 B.C.- -of the triple reed instrument Launeddas. Cantu a tenore is most known from Tenores di Bitti recorded by Peter Gabriel, Enzo Favata's collaborations with Tenores di Bitti as well as the collaboration of Dutch cellist Ernst Reijseger's collaboration with Tenores De Orosei. Most legendary is Ornette Coleman's collaboration in the '90s with four Sardinian vocalists at the 1998 Umbria Jazz Festival and his 1990 collaboration with the two Sardinian Launedda players Sergio Lecis and Dionigi Burranco in his group with Don Cherry, Charlie Haden and Billy Higgins. Especially the 90s brought an enormous cross-fertilizing productivity of jazz from Sardinia fostered by state funding.

The island of Sardinia, far south, situated between Barcelona and Naples, always had its very own characteristics and identity in terms of culture and mentality. Its official name, Regione Autonoma della Sardegna, indicates its domestic autonomy granted by a specific status. Sardinia's indigenous language and other provincial languages, such as Sassarese, Corsican-Gallurese, Algherese Catalan and Liguarian Tabarchino, are recognized by the regional law enjoying equal dignity with Italian. In ancient times its population was very much directed to the Mediterranean Sea but after the Nuraghe era the coastline became more and more unsafe and activity turned completely inland with an emerging and, for a long period, defining shepherd culture. A long Spanish-Catalan rule left a strong mark on culture, language and religion of the island.

It was a hard life in the pre-touristic age. It is impressively documented by the autobiographical novel "Padre Padrone. L'educazione di un pastore" by Gavino Ledda (1938) published in 1975 and by the eponymous movie by the Taviani Brothers in 1977. It is a bildungsroman of a different kind. The son of a shepherd is denied to go to school, is kept illiterate and grows up under the cruel education of his father in shepherding out in the field. Later he escapes—at the last minute -the fate of the massive migration to work in the Dutch coalmines in those days. Instead, along a long and arduous path, he finally became a linguist and university teacher studying the indigenous language diversity of the island. It is exemplary for a Southern European life on the threshold of modernity.

Another figure leaving a strong mark on Italy concerning social conflicts and development was Antonio Gramsci (1891-1937), the Marxist philosopher with an independent voice, who was born in Ales, in province Oristano on Sardinia.

When the sun goes down in the Valley of the Moon

It all departed the first day with a concert in the Valley of the Moon that started at 18:30. It is a site at the peninsula Capo Testa outside Santa Teresa, a cove with a small sandy beach at the bottom. For the greater part there are no regular paths leading to the bottom of the cove. An integral part of the whole experience was the descent to the site and, after the concert, the climb to get back to the cars. Often you have to climb over rocks or circumvent the rocks along small tracks of a foot width. The festival organization had to lead hundreds of visitors along this trail and with particular caution to get back after the concert in the darkness. After a 30-minutes climb-walk we arrived at the top of the cove marked by a large totem pole. The cove is dotted with huge granite rocks of bizarre forms and caves on the rim that make the landscape look lunar. Through the easing impact of the wondrous landscape the sphere and mood was one of cheerful serenity even when it took quite a while to get the electricity for the musicians fixed.

The concert of Italian vibraphonist Pasquale Mirra and Senegalesian-Italian percussionist Dudù Kouatè, later joined by festival director Enzo Favata, then transcended into waning daylight, a glowing sunset and finally finished at fallen darkness—a magical experience par excellence. Pasquale Mirra, known for his collaboration with among others Hamid Drake or the groove masters of Mop Mop, is a highly versatile, much in demand improviser of the younger Italian generation of musicians (see my review here). Dudù Kouatè is part of the current version of the legendary Art Ensemble Of Chicago. The vibrating groove, colorful waves and rustling sounds of this duo of many gifts pervaded and imbued the bay thereby enthralling the audience. Enzo Favata injected his energizing and uplifting horn lines, carrying the music up the rocks and across the water. The music even seemed to influence the mass climb back. It was quite astonishing how people cared for each other on their way over the rocks in the dark.

The site has a legendary status. In 1971 one of the first Italian hippie communes was founded in Cala Grande in Gallura and is presently still inhabited all year by believers. The festival had to work patiently to establish a modus vivendi with the residents to achieve and share a total immersion in the sound and in the beauty of the landscape.

Santa Lucia is the little church with a wonderful square near a hilltop in Santa Teresa. It is a bit remote from the crowded main-square of the town. From the hilltop, you have a view of Santa Teresa's inlet harbor. The three concerts that took place here were astonishing, each in its very own way. Flautist Marco Uselli from Alghero played an utmost euphonious and meditative concert with music of Johann Sebastian Bach. Done with great dedication and care, it was a treasure in its own right.

In the evening popular Italian singer-pianist-songwriter Sergio Cammariere, originating from the southern region of Calabria, samba-ed and united the hearts of his audience with his splendid combo in a richly swinging, undulating journey through his captivating songs. Cammariere's way of singing and merging Italian song with jazz and Latin elements with pianistic bravura is a very specific Italian thing and not existing in other European countries (except maybe in France, to a small extent). Cammariere is an excellent pianist with a characteristic voice and songs that speak to the people as part of a strong unity of rhythm and mood. This way he succeeds elegantly to bring his audience fully into his musical world. He is a welcome guest at jazz festivals in Italy and collaborates—as in Santa Teresa Gallura -a lot with jazz musicians.

Next morning in the church the duo of Maria Vicentini and Salvatore Maiore presented their Mingus World, Vicentini on viola and Maiore on cello. It was revealed as a surprising highlight. In the beginning, still a bit tentative, the essential Mingus dynamics drove upwards, and great interlocking of rhythm and melody, lead and accompaniment unfolded and were intensified with a highly attractive outcome. It ended with a strong rendition of "Fables of Faubus" and then turned into a grandioso finale. Salvatore, originating from Sassari, Sardinia, is a member of the Stefano Battaglia Trio and the Enzo Favata Trio (together with guitarist Marcello Peghin). Maria Vicentini is a classical-based musician that regularly makes crossovers to other kinds of music, including open improvisation. She has collaborated with Frank London, Ted Reichman, Achille Succi, Roberto Dani, Giancarlo Schiaffini and Cuong Vu, among others.

The sanctuary of the Madonna de Buoncammino, a rural church outside Santa Teresa Gallura, is also a site with a special emanation, a wonderful environment for Cuncordu, the ancient Sardinian tradition of polyphonic singing. It was represented by Cuncordu choir of Castelsardo, comprising the voices of Giovanni Pinna (contra), Pietro Sanna (basso), Stefano Tugulu (voce), Pier Giuseppe Pinna (falsetto), Mariano Sini (falsetto). The term 'choir' might be a bit misleading in this context. The singers stand in circle forming a body of bodies as a strong physical and mental basis for the confluence of voices that melt into each other. The group performed inside the church and outside the church under a big olive tree. It is a very strong, elementary sensation, very earthy and very celestial at the same time. It was again magnificent to experience these voices and this kind of singing. For a while, there was some interest in this kind of polyphony in the upper part of Europe and elsewhere (see above the collaborations with Ornette Coleman and Ernst Reijseger) but it did not continue. Just with the present wave of vocal work, the ancient Sardinian tradition is a quite important point of reference and a source of inspiration. Two-way exchange should happen and be organized.