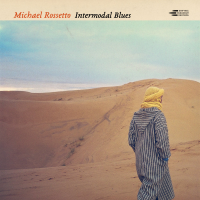 Michael Rossetto is a self-taught banjoist and guitarist, whose musical travels have taken him into global music. The focus of Intermodal Blues is the five string banjo, an instrument steeped in traditional American folk and bluegrass music. But Rosetto finds his inspirations elsewhere: in the West African kora and other instruments that were ancestors to the modern banjo; in neo-classical music; and in Italian/Sicilian/Tunisian music.

The title track opens the album with the connection to West Africa. Driven by banjo and overdriven guitar, it has a groove reminiscent of Malian guitarist Ali Farka Touré and American guitarist/producer Ry Cooder on Talking Timbuktu (World Circuit, 1993). "Three on the Five" features Jim Anton's doshpuluur (a fretless long-necked Tuvan lute) as a foil to the banjo, and a shift to an almost neoclassical style, the banjo part reminiscent of a classical guitar.

As the title implies, "Infrica" returns to a more African sound. It features Rossetto's acoustic guitar, in a reflective mood (as well as echoed electric guitar swells for accompaniment). "Something Familiar" goes into more familiar bluegrass territory, the banjo in dialog with Anton's tres (a small Cuban guitar with double courses, placing the sound somewhere in between the guitar and the mandolin). He traces the migration of his parents from the Italian alps in northern Italy through Sicily to Tunis on the two-part sequence "Down from Moncenisia" and "Ferry to Tunis." These tracks again feature the doshpuluur in dialog with the banjo (and the guitar, which is prominently used on the second track). "Magari" concludes the album with a lyrical banjo tune, played more like fingerstyle guitar than bluegrass.

Rossetto has a unique voice on the banjo, but the real star here is the group's approach to his compositions. It is an engaging sound, favoring the big picture over individual virtuosity, and spotlights an interesting blend of (mostly) acoustic instruments as well. A most enjoyable album, and a significant contribution to the "world music" genre.