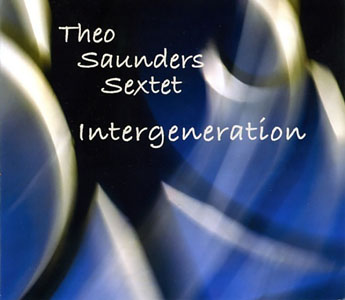 Born into the cultural vortex that is New York City's Upper West Side and raised by Broadway theater-performing parents, Theo Saunders was destined for the creative life. By the time he graduated from New York's prestigious High School for the Performing Arts, Saunders knew his future would be made seated in front of a piano playing jazz. But that future would not be in New York; at a certain point, Saunders knew he had to get out of the city, so he made the difficult decision to reverse the jazz musician's traditional west to east migration, eventually landing in the City of Angels, where he has been a vital musical presence for nearly twenty years. On Intergeneration the veteran pianist, composer and arranger has assembled a sextet of fellow LA-based musicians to help animate his compelling original compositions, as well as his hip arrangements of two classics.

Saunders arranges "It Ain't Necessarily So," the operatic jewel by Dubose Heyward/George Gershwin and Ira Gershwin, to Charles Mingus-like effect, with harmonic complexity and powerful rhythms. Manning and trombonist David Dahlsten alternate triplet patterns under Musa's bluesy statement of the familiar melody before the band, propelled by Tony Austin's scintillating drum rhythms, takes off on its improvisational journey. On the balladic "Queen of Tangents," dedicated to the pianist's effervescent "better half," Saunders displays his instrumental sensitivity as he delves deeply into his heart and soul for dreamy musical inspiration.

"Free South Africa," a joyous celebration of Nelson Mandela's victorious leadership over apartheid, swings with unrestrained vigor. Saunders infuses this tune with Latin flavor, a taste he acquired during his high school days in Manhattan and which continues to be an important influence on his music. Saunders' guest, Latin jazz great, conguero/percussionist Ray Armando, adds a dash of especially spicy Caribe sabor, while Dahlsten's solo and Manning's soaring soprano sax elevate this tune's skyward flight.

Saunders closes with an inspired reworking of "16 Tons," the old country and western hit recorded years ago by Tennessee Ernie Ford. In Saunders' musical vision, the tune becomes a John Coltrane-esque minor blues, with Musa's plaintive alto leading the way. This mournful blues, an appropriate anthem for today's beleaguered workers, hits right in the gut.